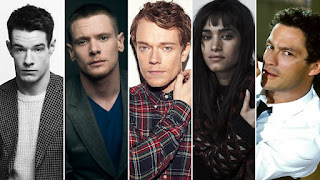 Casting has been announced for SAS: Rogue Heroes, the major new drama series from Peaky Blinders creator Steven Knight, made for BBC One by Kudos (a Banijay UK company).
Based on Ben Macintyre's best-selling book of the same name, SAS: Rogue Heroes is a dramatised account of how the world's greatest Special Forces unit, the SAS, was formed under extraordinary circumstances in the darkest days of World War Two.
Connor Swindells (Sex Education, Vigil) will play David Stirling, with Jack O'Connell (Skins, The North Water) as Paddy Mayne, Alfie Allen (Jojo Rabbit, Game Of Thrones) as Jock Lewes, and Sofia Boutella (Modern Love, Atomic Blonde) as Eve. Dominic West (The Wire, Appropriate Adult) will play Lieutenant Colonel Wrangel Clarke.
The series will also star Amir El Masry (Industry, The One), Theo Barklem-Biggs (The First Team, Carnival Row), Corin Silva (The Bay, Emmerdale), Jacob Ifan (Bang, The Accident), Dónal Finn (Cursed, The Witcher), Jacob McCarthy (The Last Summer, A.P. Bio), Michael Schaeffer (Chernobyl, The Salisbury Poisonings) and Miles Jupp (The Great, The Durrells).
Cairo, 1941. David Stirling - an eccentric young officer, hospitalised after a training exercise went wrong - is bored. Convinced that traditional commando units don't work, he creates a radical plan that flies in the face of all accepted rules of modern warfare. He fights for permission to recruit the toughest, boldest and brightest soldiers for a small undercover unit that will create mayhem behind enemy lines. More rebels than soldiers, Stirling's team are every bit as complicated, flawed and reckless as they are astonishingly brave and heroic.
Rich with action and set-pieces, SAS: Rogue Heroes is the exhilarating story of renegade men taking monumental risks in extraordinary circumstances.
Connor Swindells says: "I feel tremendously honoured to be joining this series with such a talented group of people. Portraying such an interesting man is incredibly exciting and I feel very lucky to be able to do so. It's going to be an amazing ride."
Jack O'Connell says: "I'm excited to be working on Steven Knight's bold and ambitious new project with a brilliant director and fellow cast members. Playing the legend Paddy Mayne is an honour. I can't wait to get stuck into the challenge of telling this story."
Steven Knight says: "I'm really excited to be gathering together the very best of a new generation of British and International talent to tell this remarkable story. The people who are depicted and who did such extraordinary things were young, in their 20s, and we have made a conscious decision to cast people of the same age. We enter this project with a spirit of adventure and believe our young and talented actors will do justice to this period of history."
Posted by JD at 15:52