Bill Bailey, Emily Atack, Jamali Maddix and Judi Love announced as the celebrity panel for BBC One's This Is MY House 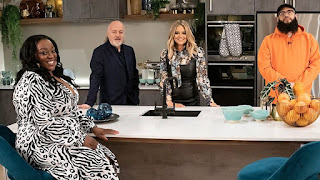 This Is MY House is a brand-new primetime entertainment show coming to BBC One in Spring. Created by Richard Bacon and Nick Weidenfeld, and produced by Expectation, the show sees four people walk into a home and say, "This Is MY House". The catch, only one of them is telling the truth.
BBC One and Expectation can confirm joining the series is comedian and current king of the ballroom, Bill Bailey, comedian and actress Emily Atack, comedian Jamali Maddix and comedian and Loose Woman Judi Love.
Hosted by Stacey Dooley, This Is MY House promises plenty of laugh out loud moments as each of the four opponents tries to prove that they are the real deal. It's a fun show that challenges our prejudices and asks a simple question. Can the truth win?
Bill Bailey says, "This is MY House is a great show and I am delighted to be taking part. I think it's a lot of fun, something that everyone needs at the moment, and I'm sure viewers at home are going to love playing along. I consider myself a good judge of character, so I hope I'll be able to spot the liars from the real homeowner and help win them some money!"
Emily Atack says, "I'm super excited to be joining the panel for This is MY House! Our job is to find the honest homeowner amongst the imposters, all who have very compelling and believable stories. It's great fun and it has that play along factor, that viewers at home will love."
Jamali Maddix says, "I had a good time snooping round people's houses, it's a fun show!"
Judi Love says, "I am beyond excited to be a part of the show, if you love a good old snoop around someone else's house like I do, then make sure you join us on This is MY House!"
Our celebrity panel will be joined by a guest panellist each week and together they will sort the fact from the fiction, and ultimately decide who they think is telling the truth. If they guess correctly, the honest homeowner will win a cash prize.
A fresh modern show like no other, with a guessing game that will keep everyone playing along from their own homes.
This Is MY House is set to be broadcast on BBC One and BBC iPlayer in Spring 2021 and further information will be announced in due course.