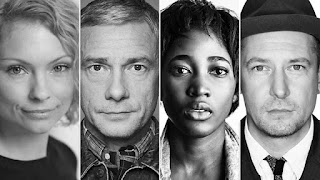 Filming begins in Liverpool today on BBC One's The Responder, a distinctive new take on crime drama from the makers of The Salisbury Poisonings, Dancing Ledge Productions.
Written by ex-police officer Tony Schumacher, his first original series for television, The Responder holds a mirror up to the emotional extremes of life on the front line of British policing - sometimes darkly funny, sometimes painfully tragic, always challenging.
Joining the previously announced Martin Freeman (The Hobbit; Sherlock; Breeders; Fargo), are Adelayo Adedayo (Unsaid Stories; Timewasters; The Capture), Ian Hart (Tin Star; The Last Kingdom; The Terror), MyAnna Buring (The Salisbury Poisonings; The Witcher; Ripper Street), Kerrie Hayes (Tin Star; The English Game; The Mill) and Warren Brown (Luther; Liar; Strike Back). David Bradley (Afterlife; Brittania; Broadchurch) and Rita Tushingham (Ridley Road; The Pale Horse; In The Flesh) will also take on roles alongside newcomers Josh Finan and Emily Fairn.
The Responder follows Chris (Martin Freeman), a crisis-stricken, morally compromised, unconventional urgent response officer tackling a series of night shifts on the beat in Liverpool. Whilst trying to keep his head above water both personally and professionally, Chris is forced to take on a new rookie partner Rachel (Adelayo Adedayo). Both soon discover that survival in this high pressure, relentless, night-time world will depend on them either helping or destroying each other.
Tony Schumacher says: "I'm so incredibly fortunate to be writing for a cast as amazing as the one we've assembled for The Responder. From legends at the top of their game, to young talents who are legends in waiting, it's a writer's dream come true."
Multi Bafta Award-winning and Emmy-nominated producer Laurence Bowen, Executive Producer for Dancing Ledge Productions, says: "Finding an extraordinary new voice like Tony Schumacher's doesn't happen often, so we couldn't be more excited to be bringing it to life on BBC One, and with Martin Freeman, one of the most exciting actors around. Producing The Responder is a great privilege."
Mona Qureshi, Executive Producer for the BBC, says: "The Responder is a unique take on modern policing, and Tony Schumacher gives us in Chris a heartbreakingly honest portrait of a man coming undone by the pressures around him. We're so excited to see Martin Freeman in this extraordinary role and for Tim Mielants to bring the night streets of Liverpool to vivid life."