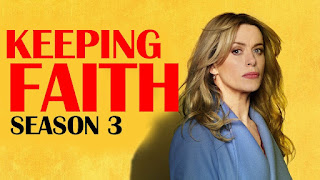 Keeping Faith returns to BBC One and BBC iPlayer for a thrilling third and final series. Eve Myles (Faith Howells), Bradley Freegard (Evan Howells) and Mark Lewis Jones (Steve Baldini) are joined by Olivier award-winning Celia Imrie (Victoria Wood: As Seen On TV, Dinnerladies, Best Exotic Marigold Hotel) and Dame Sian Phillips.
Introduction by Matthew Hall, creator and writer
"The third and last series sees Faith forced to draw on her deepest reserves of faith and love and her undying hunger for the truth as she takes on both the biggest case of her career - that of 14 year-old Osian, who is given up for dead by doctors who refuse to risk further treatment - while confronting the darkest secrets and lies of her past. Who really is Faith? Where does she come from?
In a journey that veers between tragedy and hope, tears and laughter, Faith is tested to her limits as a mother, daughter, lover, wife, best friend and lawyer until her story erupts in an emotional and unexpected climax… and her final goodbye."
Synopsis by Pip Broughton, writer, producer and director
"Keeping Faith stood out as a runaway success on BBC iPlayer two seasons running. It was loved for the intimacy of the performances and the photography, the beauty of the west Wales coastal communities and the towering, multi-layered performance by Eve Myles: frank, funny and relatable.
Series one asked the question, who is Evan? - and we followed Faith on the painful and dangerous journey to discover her husband's double life and web of lies. Series two asked, will Faith survive the betrayal? And here, in the third and final of this much loved series, we ask, who is Faith Howells?
Series three is an emotional thriller that drills deep into the character of Faith herself. Events unfold that threaten to shatter her children's faith in their mother and rob them of their well-being and innocence - damage that can never be undone. Alongside this, the legal world continues to add to the themes of justice, choice, freedom and personal liberty, as Faith takes on the biggest case of her career.
So what's the state of play? Lives have moved on in a far happier direction since the crisis at the end of series two. We return to Abercorran and find a new and largely contented order: Faith and Evan are making final arrangements pending an amicable divorce based on two years of separation. Nonetheless, there is a hovering feeling of unfinished business and an unspoken dread of the future. Faith has left Howells and has set up her own legal business with Cerys; Tom is back and leading the business with Delyth with Evan staying on as a legal executive; Lisa is drinking more than ever and running a successful 'dinner dating club'.
Steve has kept his word and not spoken to Faith for two years and has withdrawn to a place in the woods, but aches for her every day. Alys is 14 going on 19, displaying her mother's fire and tempestuousness, while Megan suffers chronic anxiety attacks. It's a lot for Faith to keep together, but juggling and surviving with her humour intact is what we have grown to love about her. The choices she makes lead inexorably to a conclusion to the three-part series that will truly surprise and thrill the viewers who have come on this journey with her.
The legal case Faith and Cerys take on is that of 13 year-old Osian Taylor, who has been diagnosed with an aggressive brain tumour. His father and consultant can't agree on whether or not to operate due to the inordinately high risk, so Mike makes an emergency application to court, seeking a 'specific issue' order under The Children Act. Faith's fight for justice and the child's right to choose takes her to the High Court of Justice in London, where ghosts from the past emerge.
At the centre of the closing series lurks an unexpected threat to Faith and every member of her family, one that pushes her further than ever before to risk everything in an attempt to save her family and herself. But at what cost?"
Posted by JD at 11:01