Little Mix, Sir Tom Jones and Beverley Knight help local BBC radio honour those who have made a difference 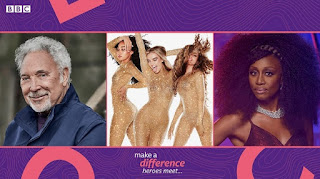 Little Mix, Sir Tom Jones and Beverley Knight say thank you to some of the local heroes whose efforts have been highlighted through BBC local radio's Make A Difference. In addition with many churches still not fully open, the Archbishop of Canterbury will deliver an Easter address and later at 10am on Easter Sunday local radio stations will join together in an uplifting documentary called Life's Second Chances featuring people who have recovered from Covid-19 and seen their recovery as a second chance at life.
Launched in March 2020 Make a Difference is a virtual notice board for those offering help and those needing it. Every day our teams speak to local community heroes; people making meals for the vulnerable, sharing provisions and generally keeping each other going.
In a series of special broadcasts this Easter, BBC weather presenter Owain Wyn Evans introduces Make a Difference heroes to music legend Sir Tom Jones, pop sensation Little Mix and singer Beverley Knight.
The Make a Difference heroes include nurse Will Garrett from Stoke-on-Trent, who during the first Lockdown was redeployed onto a Covid ward, where his wife also worked. One day their nine-year-old son Harrison overheard them talking about how difficult it was for patients to be alone. Harrison wanted to help and set about raising money, to buy some iPads for those in hospital. We will also hear about five-year-old Amaya Thompson from Stevenage who decided to save her pocket money to help the homeless.
Each of the programmes will feature music from all three artists and will be aired at 9am on Good Friday, Easter Monday and Tuesday 6 April across local BBC radio.
Chris Burns, Head of BBC Audio and Digital for BBC England, says: "All year our stations have been hearing the stories from Make a Difference heroes and this Easter we give some of them a chance to meet their musical heroes and our listeners an opportunity to hear about the amazing work they have been doing. It's a schedule that celebrates everything people have done over the last twelve months and I hope will lift people's spirits."
Highlights of the programming across all 39 local BBC radio stations to mark Easter 2021 include:
Good Friday Make A Difference heroes meet pop sensations Little Mix at 9am on your local BBC radio station.
On Easter Sunday The Archbishop of Canterbury, Justin Welby, will lead a specially produced service to celebrate Easter for local BBC Radio, which will go out at 8am across all 39 local BBC radio stations. It will contain his Easter message. This is part of the wider BBC offering for Easter Sunday which will see BBC Radio 4 and BBC One also featuring a service led by the Archbishop
Also on Easter Sunday at 10am there will be a special programme called Life's Second Chances - in it we hear personal stories from people across local BBC radio that offer hope and optimism after coming close to death from Covid, but fought back, recovered and now see life and what's important very differently
On Easter Monday at 9am across local BBC radio - music icon Sir Tom Jones meets local Make A Difference heroes
Singer Beverley Knight meets more Make A Difference heroes on Tuesday 6th April from 9am on your local BBC radio station
Tune into your local BBC radio station where ever you are from Friday 2 April for Easter programming.