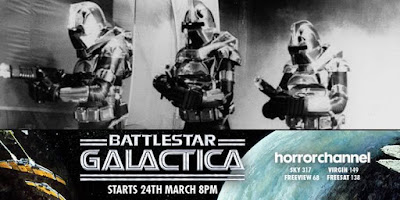 Those shiny humanity destroyers, the Cylons, are back as Horror Channel presents one of Sci-Fi's most iconic TV franchises, BATTLESTAR GALACTICA. The original series will be aired at 8pm on weekdays from Wednesday March 24. 8pm until the 10th May.

The Emmy-winning show depicts the epic futuristic battle between the last remaining population of humans and their evil robotic nemeses – the Cylons. Spiralling through space on their titular fleet, the human forces, led by Commander Adama (Lorne Greene), search the Universe for the last known plant refuge – Earth. Also stars Richard Hatch as Captain Apollo (a role that earned him a Golden Globe nomination for best actor in a television series), and Dirk Benedict as Lieutenant Starbuck, the womanizing, cigar-smoking, card playing and incredibly skilled Colonial Warrior.
Although the series was cancelled after 24 episodes, a write-in campaign revived the show as Galactica 1980 with 10 episodes. Books have also been written continuing the stories and Battlestar Galactica was remade in the early 2000s with a reimagined miniseries and a weekly series.

You can also buy the complete original series at Amazon - https://amzn.to/3lKU4dG