The Wall, TV’s toughest opponent, will return to BBC One later in 2021 for brand new series 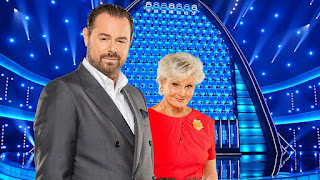 Hosted by EastEnders star Danny Dyer, The Wall (12 x 45') is the ultimate game of strategy, knowledge and luck, with questions asked by TV legend Angela Rippon. The Wall, an original format collaboration between The Springhill Company, Andrew Glassman's Glassman Media, and CORE Media in association with Universal Television Alternative Studio, was first shown in the USA on NBC in 2016 and made its UK debut in 2019, fast becoming a Saturday night favourite on BBC One.
The latest series has averaged 3.3m on 30-Day All Screens for All Audiences, peaking at 4.2m for the fifth episode and the most recent series has seen the highest episode to date for young audiences. In addition to the main series, a number of celebrity episodes have seen well-known names such as Stacey Dooley, Alex Brooker and John Barnes take on The Wall all in the name of their favourite charities.
Danny Dyer says: "I'm very excited we're coming back for another series and fingers crossed this time we will be in front of a live studio audience. I can't wait to meet all the new contestants and let's hope that one of them beats that Wall and wins some severe readies."
Angela Rippon says: "I'm so looking forward to another series of The Wall on BBC One, and once again being the 'voice' of The Wall asking the questions for this fun and dynamic programme. Danny Dyer is such a fantastic host of the show, he works brilliantly with the contestants, so I can't wait to see how successful this next batch will be"
Jo Wallace, Acting Controller of Entertainment Commissioning at the BBC, says: "The Wall is arguably the most wildly unpredictable show on TV at the moment, captivating audiences with non-stop jeopardy throughout. As well as the regular series, it will be exciting to see which celebrities are prepared to come and take on The Wall for their favourite Charity."
Richard Hague, Creative Director at Remarkable Television, says: "No matter who takes on The Wall, it's a formidable opponent and has cemented itself firmly in BBC One's schedule. A testament to Danny's refreshing candour, Angela's stylish voice and a gripping format."
As well as welcoming famous faces, applications are now open for are now open for potential contestants who think they can take on The Wall here, where the full terms and conditions are also available.
The latest series of The Wall continues each Saturday on BBC One, with previous episodes including The Wall Versus Celebrities available to watch now on BBC iPlayer.
Due to return to BBC One later in 2021, The Wall has been commissioned by Kate Phillips, Acting Controller, BBC One and Jo Wallace, Acting Controller Entertainment Commissioning. The Commissioning Editor for the BBC is Rachel Ashdown. The Executive Producer for Remarkable is Richard Hague. The Series Producer is Stephen Lovelock.