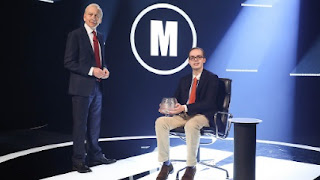 BBC One's Mastermind final tonight saw Jonathan Gibson, a 24-year-old student from Glasgow, crowned the youngest ever Mastermind Champion since the show began in 1972.
Currently studying a PhD in Modern History at the University of St. Andrews, Jonathan won by a margin of four points in the Grand Final - scoring a perfect 11/11 in his specialist subject, comedy song writing duo, Flanders and Swann.
Jonathan's other specialist subjects throughout the competition were Agatha Christie's Poirot in the heat and William Pitt the Younger in the semi-final. He scored perfect scores on all three specialist subjects, as well as a perfect general knowledge score in his semi-final round.
Tonight's grand final is John Humphrys' last episode as host of Mastermind, who has presented 735 episodes of the series and asked more than 80,000 questions during that time.
The new series with newly-announced presenter Clive Myrie, a BBC news journalist and regular presenter of the BBC News at Six and Ten, at the helm will be filmed in Belfast later in the summer and will return to viewer's screens on BBC One and BBC iPlayer later this year.