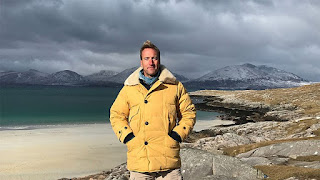 In Sacred Islands with Ben Fogle (4x60); the award-winning broadcaster, author and adventurer will explore the beating heart of community and spirituality from the Western and Northern Isles to the Inner Hebrides. This personal pilgrimage will see him explore what it is about each island that touches his psyche more deeply and what makes each a place of spirituality and sanctuary.
Complemented with spectacular drone footage, Ben will celebrate each island he visits, meeting the locals and learning of its secrets. Talking about his new series, Ben says, "Castaway changed me in so many ways. I was not the star of Castaway, the island of Taransay was, the Outer Hebrides was, Scotland was. I'm still fascinated by Scotland's islands. The remoteness, the peace, the wonder - I even named my daughter Iona after one. I'm lucky to have been to a lot of places but to me these islands are the most beautiful on Earth. This is where my roots really are, where I feel spiritually at home. This is my dream series. It's like a personal pilgrimage.'
The series will premiere on the BBC Scotland channel followed by BBC One Daytime. Steve Allen commissioned the series for BBC Scotland, he adds: "We are delighted to welcome Ben back to BBC Scotland's screens with this new series. It's hard to believe 20 years has passed since Ben captured the hearts of the nation in Castaway where we watched him fall in love with the island and the whole island experience. This series will be an authored piece which will give audiences an insight in to the profound effect Ben's 20 year love affair with Scotland's islands has had on him and what it is that draws him back."
Daisy Scalchi, BBC Commissioning Editor for Specialist Factual commissioned the series for BBC One, added: "It's fantastic to see Ben at the helm of this new series, taking a personal, insightful, spiritual journey through some of our most fascinating island communities"
Sacred Islands with Ben Fogle will be produced by Tern Television. Harry Bell, Managing Director, says: "'Islands pull at the soul. In this series we'll showcase the intoxicating beauty, wild places and astonishing people of Scotland's far-flung islands. Much more than pedestrian travelogues Ben's deep spiritual connection with island life will also reveal their sacred side."