Cast confirmed for BBC One drama Three Families, from the producers of Three Girls 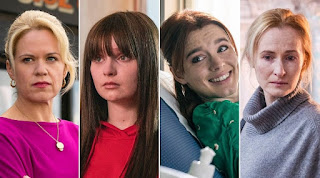 The Abortion Act of 1967 which permitted abortion in the UK did not extend to Northern Ireland. Three Families, set in 2013-19, tells the real story of three women and their families before the recent change to legislation in Northern Ireland as many voices fight to be heard.
With a cast including Sinéad Keenan (Little Boy Blue), Lola Petticrew (Bloodlands), Amy James-Kelly (Gentleman Jack) and Genevieve O'Reilly (The Dry), Three Families explores the emotive issues around abortion in Northern Ireland, and the experience of families whose lives have been profoundly affected. Names and details have been changed to ensure the anonymity of the real-life contributors.
Written by Gwyneth Hughes (Doing Money, Vanity Fair) and directed by Alex Kalymnios (The White Princess, Becoming Human), Three Families is made by Studio Lambert, an All3Media company, the producers of Three Girls, the BBC's multi-award winning account of the grooming scandal in Rochdale, and The Nest, for BBC One.
Susan Hogg, Executive Producer, says: "Growing up in Northern Ireland I was always aware of the heated debate surrounding the issue of abortion and this is a story I've wanted to tell for many years. Three Families goes behind the headlines to tell the true stories of women and girls and their loved ones who have been deeply affected by the law and some of those who worked to change it."
Gwyneth Hughes, Writer, says: "I knew the law was different, but I had no idea what that really meant until I went to Northern Ireland and met some of the families involved. I've been deeply touched by their experiences and feel honoured to be asked to share their stories. I think the contributors will all be moved, as I am, by the extraordinary truthfulness and emotional depth that these wonderful actors bring to their stories."
Piers Wenger, Director of BBC Drama, says: "Abortion is a complex and emotive subject, and it continues to divide opinion in Northern Ireland and elsewhere. Following months of detailed research, Gwyneth and the Studio Lambert team will help audiences get an insight into how abortion law has affected many different women and their families. Their stories are powerful, personal and memorable."
Further cast includes Colin Morgan (Humans), Owen McDonnell (Killing Eve), Prasanna Puwanarajah (Defending the Guilty) and Kerri Quinn (Coronation Street). Filming took place in Northern Ireland last year.
Three Families is a Studio Lambert production for BBC One. It was commissioned by Piers Wenger, Director of BBC Drama and Charlotte Moore, BBC Chief Content Officer. It is executive produced by Susan Hogg and Gwyneth Hughes for Studio Lambert, and Gaynor Holmes for the BBC. The series global partner is All3Media International.
The two-part drama was previously known under working-title When It Happens To You.