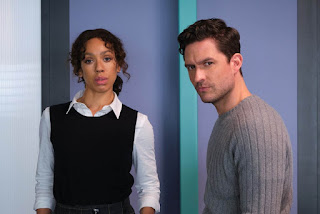 First look image of Ben Aldridge and Pearl Mackie as filming begins for ITV's new evocative four-part series, The Long Call
Lead actor Ben Aldridge (Our Girl, Fleabag) has begun filming The Long Call, ITV's gripping four-part event drama adapted by Kelly Jones (Des, Baptise) from the best-selling novel of the same title from award-winning writer Ann Cleeves.
Directed by Lee Haven Jones (Dr Who, Shetland, The Bay) The Long Call follows Detective Inspector Matthew Venn, who has returned to live in a small community in North Devon with his husband, Jonathan (Declan Bennett).
Matthew was brought up in the Barum Brethren before leaving to go to University. At 19 he knew he couldn't continue amongst the community and to his mother's shock and dismay, he declared publicly he no longer believed. Now he's back, not just to grieve for his father, but to lead a shocking murder investigation back where it all began for him.
Matthew is now forced to re-engage with the community he left, including the most painful and challenging of relationships, with his mother Dorothy played by award-winning actress Juliet Stevenson (Riviera, Truly Madly, Deeply).
After the body of a man is found on the beach close to Matthew's home, the investigation throws a cast of doubt on the whole community. Matthew and his team have to get to the bottom of a case which bring with it old wounds and a deadly secret in order to expose the killer.
This powerful and thought-provoking series also stars Pearl Mackie who plays DC Jen Rafferty, a tough and fiercely determined woman who has recently relocated to Devon with her two teenage kids, Ella and Ben. As a diligent worker and a single parent Jen muddles her way through domestic life whilst trying to put some distance between her own traumatic scars from her former life living in London.
Pearl Mackie is notable for her work in television, theatre and film and is best known for her work in the long-running BBC series, Doctor Who, where she played the role of the Doctor's companion, Bill Potts, opposite Peter Capaldi. Pearl's work in theatre includes the award winning and critically acclaimed stage adaptation of The Curious Incident of the Dog in the Night-Time and Harold Pinter's The Birthday Party. Her film credits include Greed starring Steve Coogan and Isla Fisher.
Ben, Juliet and Pearl are joined by Martin Shaw as the spiritual Brethren leader Dennis Stephenson and Anita Dobson who plays Grace Stephenson.
Adding to the illustrious cast are Dylan Edwards as DC Ross Pritchard, Pearce Quigley as DCI Joe Oldham, Neil Morrissey as Christopher Reasley, Sarah Gordy as Lucy Craddle, Alan Williams as Maurice Craddle and Amit Shah as Ed Raveley.