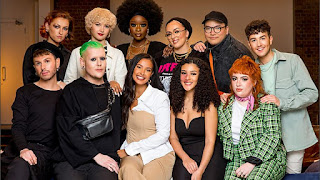 
The new ten MUAs are hopeful to impress the judges and be tipped as Britain's Next Make-Up Star, winning a contract to work alongside some of the world's biggest artists.
Series three will see the battle of the brushes take place across multiple real-world assignments and challenges, as the MUAs get to work on everything from studio shoots and campaigns with Superdrug and Asos, through to period make-up and prosthetics on set with Pose, The Crown and Peaky Blinders. Internationally recognised photographer Rankin invites the MUAs to work on a look for a music video with Jonas Blue and Awa, while global TikTok superstar Abby Roberts teaches them what works on social media. Finally, Lisa Eldridge, one of the world's most experienced and respected make-up artists, completes the line up for the final challenge: a masterclass in make up.