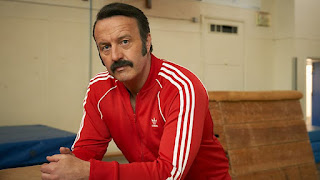 Billed as 'a comedy show for the internet age', Age Of Outrage follows a pilot broadcast on BBC One Wales in February 2020. Shining a light on the frustrations of modern life, the series of six, 20-minute episodes will be one of the first productions in the world to use the innovative technology and virtual sets in a full project.
The new productions aim to establish themselves as a new generation of Welsh comedies, following in the footsteps of recent successes such as The Tuckers and the RTS and BAFTA Cymru-award winning In My Skin.
Forthcoming productions also include a 30-minute pilot Mammoth, written by and starring Mike Bubbins (Tourist Trap; The Unexplainers) alongside Joseph Marcell (The Fresh Prince of Bell Air), Jan Anderson (Casualty, Curb Your Enthusiasm) and Mali Ann Rees (Tourist Trap). Long-running BBC Radio Wales sitcom Bravo 2 Charlies is also making its TV debut, as well as two separate series of short form films featuring writers and performers who have previously worked with BBC Sesh - BBC Wales' platform for helping develop creative talent across Wales with content aimed at 18-34 year olds.
Mike Bubbins says of his forthcoming sitcom, "Tony Mammoth is a man from the 1970s who is frozen in time, to be brought miraculously back to life in the modern day. I tried to make Mammoth a comedy full of heart, positivity and optimism. It has a brilliant, talented cast and crew, and BBC Wales couldn't have been more supportive throughout the whole process. I still can't quite believe it's happening. I didn't think when I resigned as a PE teacher and drove out of the school gates, to try to make a career of comedy, that one day, just fifteen short years later, I'd be driving back in through those same gates to record my own BBC sitcom."
As announced towards the end of last year, the Steve Speirs-penned comedy series The Tuckers will be returning for two more series, with filming due to start in Summer 2021. In My Skin, the multi award-winning comedy-drama from BBC Three and BBC Wales, has recently been recommissioned for a second series. Filming is already under way in Cardiff.
Mammoth
Written by and starring Mike Bubbins, Mammoth follows the story of 1970s PE teacher Tony Mammoth, who is presumed to have been killed in an avalanche on a school trip in 1979. With his body later discovered, he is miraculously brought back to life to resume his teaching position… in 2021.
Produced by BBC Studios and directed by Adam Miller (The Windsors), the 30-minute pilot will also star Joseph Marcell (The Fresh Prince of Bel Air), Welsh actress Jan Anderson (Casualty, Curb Your Enthusiasm) and Mali Ann Rees (Tourist Trap).
Beena And Amrit
A short-form taster episode starring up-and-coming Welsh comedian Priya Hall, co-written with Sarah Breese. Based on her experiences growing up in an Indian family in the south Wales valleys and her relationship with her mother, Priya plays Beena with Meera Syal (Goodness Gracious Me, The Kumars at No. 42) playing the role of the mother.
Produced by Cardiff's 16 Media, the episode is currently in post-production.
Bravo 2 Charlies
Short-form taster TV episode of the successful, long-running BBC Radio Wales sitcom which documents the daily lives and antics of the North Wales Traffic Police.
Produced by Llandudno-based company Giddy Goat.
BBC Sesh Short Form
Two forthcoming sets of six 5-minute shorts are due to start filming in the summer. Featuring writers and performers who have previously worked with BBC Sesh, these series demonstrate BBC Wales' commitment in developing production companies as well as giving additional opportunities to actors discovered through the Sesh platform.
Little Wander and Rubber Chicken will produce one set of shorts each.
Porth Purgatory
Porth Purgatory follows the trials and tribulations of a male twenty-something who is forced to take on what he believes to be a dead-end job.
Co-written and devised by The Royal Welsh College of Music and Drama graduate Garyn Williams, working in conjunction with The Mobile Film School, a taster has been filmed and directed by co-writer Kevin Allen (Twin Town).It features star of 'It's A Sin' and fellow Royal Welsh College of Music and Drama alumni Callum Scott Howells.
Age Of Outrage
Billed as 'a comedy show for the internet age', the series follows a pilot show that transmitted in February 2020. The show shines a light on the frustrations of modern life. The series made use of pioneering AI technology (previously seen in Star Wars spinoff The Mandalorian) and virtual sets so that it was able to be filmed during the pandemic. It is due to be broadcast later this year.