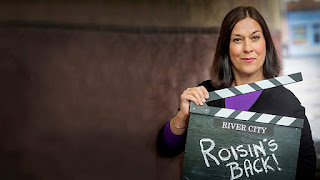 Roisin McIntyre - one of River City's most loved characters - is set to make a dramatic return to BBC Scotland's popular weekly soap, with actress Joyce Falconer resuming the role last seen on screen in 2008.
Loud, brash and generally outspoken, Roisin arrived in 2002 and fast became one of the show's most iconic characters, with her unmistakable Doric accent and no-nonsense attitude towards life.
An employee of the Lazy Rays tanning shop on Montego Street, some of Roisin's most memorable storylines included her love affair with boss Raymond (Paul Samson), winning the lottery, her over-the-top wedding to Raymond and reunion with her secret love child Alanna (Jade Lezar), among others.
Actress Joyce Falconer recently resumed her role as Roisin and started filming again at River City's BBC Dumbarton Studios for scenes which will air on the BBC Scotland channel, BBC One Scotland and BBC iPlayer in August this year.
The Aberdeenshire actress is relishing her return to Shieldinch: "I'm delighted to be back in the River City family. No matter what else I've done in my career Roisin never really left me, so it's a joy to step back on to Montego Street and get to know her all over again.
"She's always been a brilliant role to play and I'm excited about the storylines she'll embrace. Roisin's a tough quine with a big heart who knows what she wants and how to get it! She's still bold and brassy but expect to see another side to her too."
Another new arrival is broadcaster and actor Grant Stott, who joins River City as a new character who will stir up the past for some of Shieldinch's residents. Grant starts filming on the drama in June for scenes which will air later in 2021.
A close friend of the late Andy Gray, who played loveable rogue Pete Galloway in the Scottish soap, Grant says: "Andy and I often joked about me joining the River City cast and imagined the scenarios we'd get into on screen. But life got in the way and it never quite happened. So to find myself part of the show which was so special to Andy - which showcased his incredible acting ability - means a great deal to me. It feels right and it's almost like a parting gift from my dear friend Andy. It's a massive comfort to follow in his footsteps and walk into Montego Street. I can't wait to get started on River City."
Joyce and Grant join the cast alongside other new faces Brian James Leys who plays Ash, the absent father of troubled teen Ruby McLean (Zindzi Hudson) and Caitlin's ex (Gayle Telfer Stevens); Sammy Hayman as Darren Foulkes, the charming older brother of local criminal Tyler (Cameron Fulton); and Claire Dargo who takes on the role of Karen McAllister, the estranged ex-wife of Alex (Jordan Young) and mother to Jessie (Kirsty Pickering).
Martin McCardie, BBC Studios Series Producer for River City, is thrilled to welcome Joyce back to the Shieldinch-set soap: "Joyce Falconer is a fantastic actress and her portrayal of Roisin McIntyre has always stuck in the minds of fans of the show. We are delighted to have her back in Shieldinch, Roisin still has a lot of living to do in River City and Joyce is an absolute delight to have as a returning member of the team, the other actors gave her a round of applause when we all met up in our first zoom call for the series, and that says it all really!
"We are also delighted to have the fantastic Grant Stott joining the cast, he will have a huge impact on some of our regular characters and will hopefully enjoy being on the show. The late, great, Andy Gray - who played Pete Galloway in River City - was always recommending Grant as an actor and as a team player to the show, we are happy to say that we listened to him."