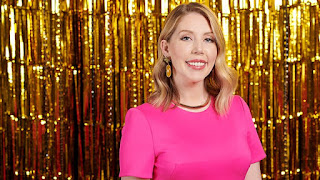 The BBC have today announced that All That Glitters: Britain's Next Jewellery Star, the BBC Two talent search hosted by Katherine Ryan, has been commissioned for a second series.

Ryan hosted the first six-part series from a specially built workshop nestled in Birmingham's historic Jewellery Quarter, home to more jewellers than anywhere else in Europe and a place that's been a jewellery-making hub for over 500 years. The first series saw eight talented jewellers battle it out over the course of the six weeks, designing and creating jewellery to brief, with 24 year-old Haywards Heath-based diamond mounter Hugo Johnson taking home the title. It was very well received, launching with a peak of 2.6m for the first episode and averaging at 2.3m across the series (all-screens +7days audience).
Katherine Ryan says: "I am so delighted to be back again to host the beautiful show that is All That Glitters. The first series was a total joy to be a part of and taking part in the next series has absolutely nothing to do with the diamond rings, ruby tiaras or sapphire encrusted chokers I may or may not get to wear if my rider is agreed to."
Each show tasked the jewellers with two real-world challenges; The Best Seller, where they must design a piece that will appeal to a mass market, and The Bespoke, where they make a real client's dreams come true. The consolidated viewing figures for the BBC Two series averaged 2.3 million and peaked at 2.6 million during the first episode.