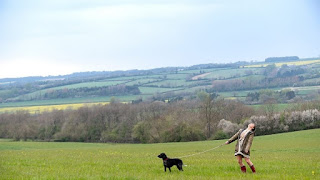 Written by and starring Lucy Pearman (Red Dwarf, The Mind of Herbert Clunkerdunk, Mister Winner) Please Help Me follows the story of a normal girl living and working on an isolated farm in Oxfordshire who is trapped in a mundane and claustrophobic life as her grandmother's only carer. As life becomes increasingly fraught she develops bizarre and inexplicable magical powers that make her absolutely NOT normal anymore.
The episode, which has just finished filming on location in Oxfordshire, also stars Anna Calder-Marshall, Harry Peacock, David Mumeni and Edward Bluemel and will be broadcast later this year on BBC Three on BBC iPlayer.
Lucy Pearman says: "I'm very excited and also scared to be writing and creating a project for the BBC with Tiger Aspect. I can't believe how much admin is involved in making 15 minutes of TV but I'm having the time of my life. I've got an amazing cast and crew and I finally get to work with a Shetland pony, what more could a girl ask for."
David Simpson, Head of Tiger Aspect Comedy, says: "Lucy is a true original. Her script is brilliantly crafted and simultaneously warm and charming and wildly funny. We can't wait for people to see it."
Ben Caudell, Commissioning Editor for the BBC says: "Lucy is an absurdist auteur who has given us a thrilling slice of comic magic realism that defies categorization, even though I just called it comic magic realism. It's been an absolute joy to be tangentially involved with it, not least because I get to send emails where the subject line is 'PLEASE HELP ME' and it be a straightforward work email rather than my regular desperate cry for urgent assistance."