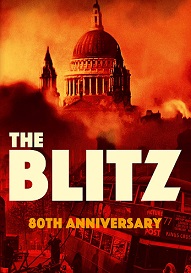 The Blitz - 80th Anniversary - Released on DVD from 10th May
And to celebrate we have a great competition for you and a copy on DVD to give away.
Synopsis:
On the 80th Anniversary of The Blitz, one of the greatest tragedies in British history, that saw the Nazis invade the UK with a devasting bombing campaign that led to the tragic loss of thousands of lives, Reel 2 Reel Films presents a fascinating new documentary The Blitz80th Anniversary to commemorate this pivotal event of World War II.
The film offers a brand new insight into how ordinary people managed to survive with incredible acts of courage and features amazing never seen before archive footage, along with powerful interviews with those who experienced it first-hand. The Blitz80thAnniversary is set to arrive on DVD and digital on 10 May 2021.
Between 1940 and 1941, the German Luftwaffe regularly bombed different areas of Britain, including the relentless bombing of London, over 56 nights. Sadly the devastating campaign saw more than 40,000 civilians killed in what was to become known as The Blitz.
Now this fascinating and powerful documentary sheds light on those fateful months and how they affected the British people living in the cities under attack. The film delves into the real story of The Blitz, how it played out from city to city, with an in depth look into the build-up and the difficult and emotional personal stories.
Pre-order on Amazon: https://amzn.to/3xKWGOf
For your chance to win just answer the question below.

COMPETITION CLOSED
Terms and conditions
1. Closing date 17-05-21
2. No alternative prize is available
3. When the competition ends as indicated on this page, any and all entries received after this point will not count and emails blacklisted due to not checking this page first.
4. Winners will be chosen randomly and will be informed via email.
5. Entries that come directly from other websites will not be accepted.

Email ThisBlogThis!Share to TwitterShare to FacebookShare to Pinterest
Labels: The Blitz