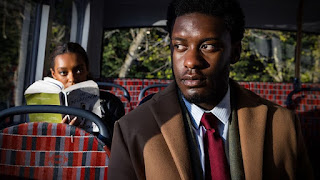 The first image from the highly anticipated upcoming four-part drama You Don't Know Me, has been released today. Based on Imran Mahmood's bestselling novel, the adaptation is written by Tom Edge (The Crown, Vigil) and produced by Snowed-In Productions (Too Close, Mrs Wilson) and co-produced with Netflix for BBC One and BBC iPlayer.
You Don't Know Me stars Samuel Adewunmi (The Last Tree, Angela Black), newcomer Sophie Wilde, Roger Jean Nsengiyumva (Tomb Raider, Sixteen), Tuwaine Barrett (The Personal History of David Copperfield, The Last Tree), Yetunde Oduwole (Carnage, Meet The Adebanjos) and Nicholas Khan (Transformers: The Last Knight, Exodus: Gods and Kings) alongside Bukky Bakray (Rocks, Self-Charm) who recently became the youngest ever winner of the Bafta Rising Star Award at the age of 19; she also earned a Bafta Best Actress nomination for her role in the film Rocks.
Directed by Sarmad Masud (My Pure Land, Bulletproof, Ackley Bridge), the drama centres on a young man, who, with overwhelming evidence against him, stands accused of murder. At his trial, Hero (Adewunmi) tells an extraordinary story. It is about the woman he loves, Kyra (Wilde) who got into terrible trouble. It's about how he risked everything to save her. He swears he's innocent. But in the end, all that matters is this: do you believe him?
The series producer is Jules Hussey (Guilt, Catherine The Great) and the producer is Rienkje Attoh (Noughts + Crosses). Executive producers are Ruth Kenley-Letts, Neil Blair and Jenny Van Der Lande (Too Close, Mrs Wilson) and Kate Crowe (Taboo, Great Expectations). Lucy Richer and Nawfal Faizullah are executive producing for the BBC.
You Don't Know Me was filmed in Birmingham and will air later this year on BBC One and BBC iPlayer in the UK. Netflix has world-wide rights outside the UK, Ireland and China.