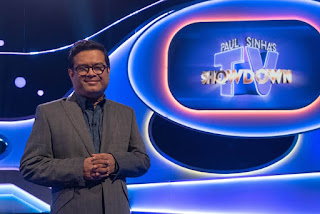 Chaser, comedian and TV Trivia genius Paul Sinha will return with an exciting new series of Paul Sinha's TV Showdown later this year, on ITV and ITV Hub.
Produced by Livewire Pictures, Paul Sinha's TV Showdown will see more famous faces battle it out in the ultimate TV trivia quiz.
Alongside Paul, Series 2 will also see the return of hilarious team captains Fay Ripley and Rob Beckett, who will be heading up two dazzling teams of celebrity contestants.
The new series will be bursting with more brilliant clips, featuring the most talked-about TV moments from recent years and yesteryear.
Once again, even the most self-proclaimed of quiz pros will be tested as Paul guides the celebrities through four challenging rounds, including questions about a smorgasbord of clips, identifying a TV character from a set of clues given by celebrity guests, and the dramatic final spotlight round.
Paul Sinha said ""It's great to be back hosting TV Showdown and I can't wait to see which celebrities rise to the occasion and which fall apart under the pressure"
Guy Freeman, MD at Livewire said "For anyone who's in the mood for a good laugh and the chance to show-off to friends or family that you know more about telly than they do - all in the excellent company of Paul, Fay, Rob and their celebrity teams – this is the perfect show to round off your Saturday evening viewing"