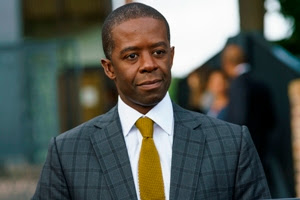 Adrian Lester joins Vicky McClure in ITV's six-part thriller series, Trigger Point, written by screenwriting newcomer,  Daniel Brierley, and produced by Jed Mercurio's HTM Television
Adrian Lester will star alongside Vicky McClure in new ITV drama Trigger Point which will turn the spotlight on counter terrorism policing and the extraordinary work of the Metropolitan Police Bomb Disposal Squad.
Written by Daniel Brierley and produced by HTM Television, Trigger Point, is a high-octane six-part thriller series which focuses on the officers who risk their lives daily on 'the long walk' towards danger. For them, death is always just a heartbeat away.
Vicky McClure (Line of Duty, I Am Nicola) plays front line officer Lana Washington, who is an experienced bomb disposal operative, known as an 'Expo' and Adrian Lester (Life, Trauma) plays Joel Nutkins, who works alongside her. Both ex-military, the pair are close, having served together in Afghanistan.
When a terrorist campaign threatens the capital over the summer, the Expos are at the forefront of urgent efforts to find out who is behind the bombings before fatalities escalate…..
Further cast includes Mark Stanley (Honour) as DI Thom Youngblood, Warren Brown (Luther) as Karl Maguire, Kerry Godliman (After Life) as Sonya Reeves, Cal MacAninch (Des) as Lee Robins SCO19, Manjinder Virk (Midsomer Murders) as Samira Desai SO15 and Ralph Ineson (The Capture) as Commander Bregman.
Commented Adrian Lester:
"I'm really looking forward to partnering with Vicky on this great new series. Jed Mercurio's material is always great. This series is ambitious and challenging which is why it's exciting to be a part of the team."