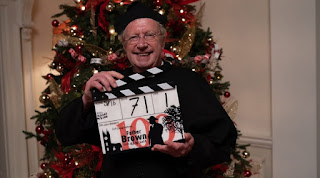 The new series (10x45') will include a special programme to mark the 100th episode, which is set on New Year's Eve. The new series will air in early 2022 on BBC One daytime.
Father Brown, which is produced by BBC Studios, is based on the stories by GK Chesterton about a crime-solving Roman Catholic priest played by Mark Williams (Harry Potter, The Fast Show), who once again resumes his role.
Mark Williams says: "We love telling our stories as much as the world loves watching them. A modest, warm daytime drama that achieves one hundred episodes and global success. Who'd have thought it?"
Mark stars alongside returning cast members; Sorcha Cusack (Mrs McCarthy), Jack Deam (Inspector Mallory) and John Burton (Sergeant Goodfellow) are Alex Price (Sid Carter), Nancy Carroll (Lady Felicia), Emer Kenny (Bunty Windermere) and John Light (Hercule Flambeau).
The 100th episode, The Red Death, will see Lady Felicia and her husband Monty host a lavish masked ball counting down to 1954. However, their plans are ruined when the Minster of Defence, Sir Charles Hakeworth is murdered by a masked figure. With the estate locked down and a killer in the midst Father Brown and the gang must find the real perpetrator. Guest cast appearances in the 100th episode will include Richard Dillane (Sir Charles Hakeworth) Alexander Hanson (Lord 'Monty' Montague), Gemma Page (Lady Agnes Hakeworth), Caleb Frederick (Dr Elliot Muthomi), Nicholas Audsley (Robert Earl of Finchmore) and Cam Spence (Ruth Moulton).
Father Brown, which first aired on BBC daytime in 2013, is now a global success and broadcasts in over 232 territories around the world, including on primetime in the USA.
Series nine will air on BBC One daytime in early 2022.