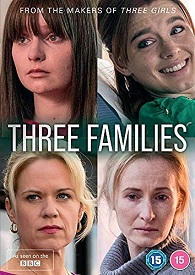 Three Families - Released on DVD from 28th June
And to celebrate we have a great competition for you and 3 copies on DVD to give away.
Synopsis:
The Abortion Act of 1967, which permitted abortion in the UK, did not extend to Northern Ireland. The critically acclaimed Three Families, set between 2013-2019, tells the true story of three women and their families before the recent change to legislation in Northern Ireland as many voices would fight to be heard.
With a stellar cast including Sinéad Keenan (Little Boy Blue), Lola Petticrew (Bloodlands), Amy James-Kelly (Gentleman Jack) and Genevieve O’Reilly (The Dry), Three Families is a stunning two-part dramatisation, exploring the emotive issues around abortion in Northern Ireland, and the experience of families whose lives have been profoundly affected.
Dazzler Media presents Three Families on DVD and Digital from 28th June
Pre-order on Amazon: https://amzn.to/3xA7L3U
For your chance to win just answer the question below.

COMPETITION CLOSED
Terms and conditions
1. Closing date 05-07-21
2. No alternative prize is available
3. When the competition ends as indicated on this page, any and all entries received after this point will not count and emails blacklisted due to not checking this page first.
4. Winners will be chosen randomly and will be informed via email.
5. Entries that come directly from other websites will not be accepted.