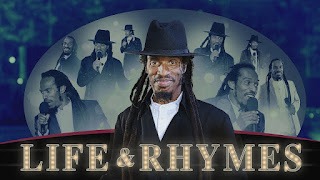 BAFTA Award-winning spoken word series Life & Rhymes will return to Sky Arts, the UK's only TV channel dedicated to arts and culture, later this year. The Sky Original series, hosted by acclaimed British writer and poet, Professor Benjamin Zephaniah, sees some of the country's leading spoken word performers and select members of the audience showcase their lyrical creativity on topics such as racism, gender, sexuality and mental health. The first entertainment show of its kind, Life & Rhymes celebrates the art of spoken word and brings it to a mainstream setting.
Phil Edgar-Jones, Director of Sky Arts and Entertainment, said:
"Life and Rhymes is a true original – placing performance poetry on the pedestal it deserves. It's vibrant and relevant and provides a powerful platform for many voices to be heard, all under the nurturing gaze of Benjamin Zephaniah who's a God."
The first 4x26 minute series of Life & Rhymes was filmed during lockdown in front of a live socially distanced audience in South London's Battersea Park. The second series will return to Battersea Park and will air this autumn.
Professor Benjamin Zephaniah, said:
"I'm looking forward to presenting a new series of Life and Rhymes. Giving a platform to people to speak their truth through poetry and the spoken word, is a joy. It's a programme with no ego. It's a programme about people. It's the programme I've waited all my life to present. It's good to be home."
Life & Rhymes triumphed at the BAFTA Television Awards earlier this month where it won the award for Best Entertainment Programme, beating off competition from Ant & Dec's Saturday Night Takeaway (ITV), Strictly Come Dancing (BBC) and The Masked Singer (ITV).
Life & Rhymes was commissioned by Zai Bennett, Managing Director of Content for Sky UK and Ireland and Phil Edgar-Jones, Director of Sky Arts and Entertainment. The commissioning editor for Sky is Barbara Lee.  Isaac Nartey, a Sky Academy Leader in the young people department at Sky, also gained Associate Producer and Co-Creator credits on the programme for his lifelong passion to showcase the much-underrepresented genre.