BBC Two announces Chris Packham: The Walk That Made Me 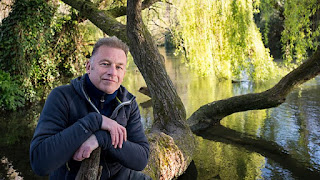 Naturalist and broadcaster Chris Packham embarks on a deeply personal and emotional journey through his often challenging past as he walks in the beautiful Hampshire countryside that he says shaped and probably saved his life.

Wandering along the River Itchen and Itchen Navigation, Chris explores the importance of natural surroundings when it comes to wellbeing. His walk stirs up powerful and difficult memories of living with undiagnosed Asperger's Syndrome as he was growing up.
He recalls travelling this very stretch with his father and playing in the fields with his beloved kestrel. With honesty and openness, Chris describes how nature saved him from isolation and pain.
Walking with a hand-held 360-degree camera, he heads north, starting a few miles outside Southampton and ending up at Winchester Cathedral. Following the path of one the oldest waterways in the country, he meets those who live, work and play in the area.
With his characteristic wit and encyclopaedic knowledge, he discusses the joy that the water brings to wild swimmers, observes local enthusiasts as they maintain centuries-old farming practices by flooding a local meadow, and speaks to residents and other walkers along the way.
He offers thoughts on mental health that he hopes will help others and describes the life-saving and life-changing qualities of 'natural health', including his childhood walk, and time spent with his precious poodle companions.
This is the TV naturalist as you've never seen him before as he travels in his own distant footsteps, along the route where he forged his lifelong wonder of nature.
On his journey Chris reflects on how walking continues to help improve his mental health, saying: "Those meadows were my playground. Where I came to skip and run, and search and learn, and escape and survive. Those meadows shaped and probably saved my life.
"Walking every day is now central to my mental health regime. And the reason why I talk about this stuff is because I still fear that out there somewhere there will be teenagers all over the UK, people in their early 20s with Asperger's or something similar, stuck in their bedrooms and they will be really, really unhappy. Having been there, I wouldn't wish that on anyone. It does get better, the more of your life you can control, the better it gets."
Aisling O'Connor, Head of TV Commissioning BBC England, says: "Our walking programmes have delivered a timely and inspiring treat for audiences during the past year, and in this charming and emotional film Chris takes us through some of Hampshire's most beautiful countryside. He also reveals intimate thoughts about growing up in this part of the world, and addresses important points on the subject of mental health.
"Working with Chris, the producers have created a gentle, sensory and immersive experience for viewers. They use new technology to offer a different perspective, with stunning visual images of landscapes and a rich soundtrack."
Watch on BBC Two at 8pm on 28 July, and on BBC iPlayer.