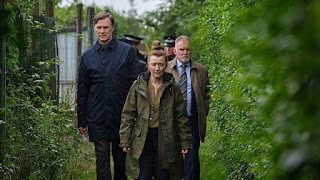 Casting has been announced and the first pictures from set revealed, as filming gets underway on James Graham's new BBC One drama, Sherwood.
Inspired in part by real events and set in the Nottinghamshire mining village where Graham grew up, at the heart of Sherwood lie two shocking and unexpected killings that shatter an already fractured community and spark a massive manhunt. As suspicion and antipathy build - both between lifelong neighbours and towards the police forces who descend on the town - the tragic killings threaten to inflame historic divisions sparked during the miners' strike three decades before.
Sherwood is at once a compelling, contemporary crime drama that explores for the first time the controversial deployment of so-called 'spycops' around Britain, and a distinctly human story of a community forced to re-examine the terrible events of decades ago, for which it still bears the scars.
It is also a powerfully resonant and timely examination of the frayed social and political fabric of modern day, post-Brexit Britain. From the often ignored former 'red wall' towns and communities, whose lives and futures can be reduced to political footballs and endless discourse from the commentariat, to entrenched anxiety that can define the relationship between marginalised communities and the police force, to the evolving role and uncertain future of protest itself, Sherwood explores and exposes some of the most urgent fractures and discords threaded through modern British society.
Detective Chief Superintendent Ian St Clair (David Morrissey - Red Riding, Britannia, The Missing, State Of Play, The Walking Dead), is a lifer in the Nottinghamshire constabulary, having risen through the ranks. Canny and a good judge of character, he is a formidable and empathetic detective with an impressive track record to prove it. When he is tasked with finding the link between these two killings, he is forced to reunite with DI Kevin Salisbury, an old rival from the Metropolitan Police, whose return to the town threatens heightens the already febrile tensions running through the community.
Detective Inspector Kevin Salisbury (Robert Glenister - Hustle, Spooks, Law & Order UK) has little desire to return to Ashfield. There are too many reminders of what happened in 1984, and he's unlikely to get the warmest of welcomes from the local police force nor the local community. But he has orders to follow, and he's determined to prove that he stands for honour and integrity.
Gary Jackson (Alun Armstrong - Breeders, Year Of The Rabbit, Frontier, New Tricks) is a committed NUM member and one of the few miners from Ashfield on the picket line in the 80s. He won't let anyone forget it, even decades later, which sets him at odds with his neighbours. His wife, Julie Jackson (Lesley Manville - Phantom Thread, Harlots, Mum, Save Me Too, and recently confirmed to take over the role of Princess Margaret in The Crown for series five), estranged from her sister Cathy over their divided loyalties during the miners' strike, is as stubborn as her husband, but fiercely proud of the warm household she has created for her family.
Mickey Sparrow (Philip Jackson - Brassed Off, Raised By Wolves, My Week with Marilyn, Poirot) is an entrepreneur, proud of his portfolio which includes an axe throwing range and taxi firm. However, as much of the town suspects, most of his income comes from other, less-legal means. So, when suspicion points to the Sparrow family, Mickey's empire comes under threat. Daphne Sparrow (Lorraine Ashbourne - Bridgerton, The Crown, I Hate Suzie, Alma's Not Normal, Unforgotten) is the matriarch. Forthright and fearless she will do whatever it takes to protect her family. When everything and everyone she holds dear comes under threat, it becomes apparent just how far Daphne will go for them, including her son, Rory (Perry Fitzpatrick - Line Of Duty, This Is England 90, Man Like Mobeen).
Cathy Rowley (Claire Rushbrook - Genius: Einstein, Don't Forget The Driver, Enola Holmes, Home Fires and Ali and Ava) has always lived slightly in her sister's shadow. The miners' strike tore the pair apart when Cathy fell in love with UDM working miner Fred Rowley (Kevin Doyle - Downton Abbey, Happy Valley, Scott & Bailey), a quiet and reserved man. Her relationship with her introverted and deeply private stepson Scott (Adam Hugill - The Watch, 1917) is also strained. But when tragedy strikes close to home, Cathy is forced to reckon with the woman she has become, and the dark secrets that have been hidden behind closed doors.
Andy Fisher (Adeel Akhtar - Murdered By My Father, Sweet Tooth, Utopia) is a delicate and shy man who lost his wife years ago and has struggled to cope with that loss, ever since. He leans on his son Neel (Bally Gill - Wanderlust, Romeo & Juliet, NW) for emotional support, and though Neel is much obliging, Andy feels like he's losing his son to his son's fiancée Sarah (Joanne Froggatt - Downton Abbey, Liar, Angela Black), who struggles to hide how uncomfortable she is in her soon-to-be father-in-law's company.
And it's not just the arrival of the Met police which stirs up old memories. With the reappearance in the town of Yorkshireman and staunch NUM member Warnock (Stephen Tompkinson - The Split, Brassed Off, DCI Banks) new seeds of suspicion surrounding the events from 1984 are sown when he alludes to activity of the Met Police's undercover police unit during the strikes.
James Graham has written all six parts and will be an executive producer on the series. Lewis Arnold (Time, Des) is lead director and executive producer, and the producer is Rebecca Hodgson (The Irregulars, Deep Water). Juliette Howell, Tessa Ross and Harriet Spencer are executive producers for House Productions and Ben Irving will executive produce for BBC. Sherwood was commissioned by Charlotte Moore, BBC Chief Content Officer, and Piers Wenger, Director of BBC Drama. BBC Studios will distribute the series internationally.