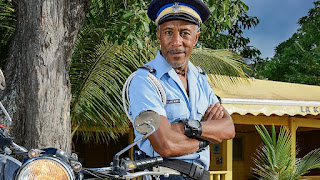 Fans of Death In Paradise are in for a Caribbean Christmas treat this December with BBC One commissioning its first ever feature length episode. Concluding the tenth anniversary celebrations, the festive 90-minute special, which stretches from a grey damp drizzly London all the way to the warm sparkling beauty of idyllic Saint Marie, will see the return of Danny John-Jules as charismatic Officer Dwayne Myers, for this celebratory episode.
Also joining the regular cast (Ralf Little, Joséphine Jobert, Tahj Miles, Don Warrington and Elizabeth Bourgine) for this one-off sunny special are Mathew Baynton (Ghosts), Juliet Stevenson (Riviera), Stanley Townsend (Informer), Jocelyn Jee Esien (Jack & The Beanstalk: After Ever After), Anthony Calf (Poldark), Tessa Bonham Jones (The Trial of Christine Keeler), Elizabeth Tan (Emily in Paris) and Tariq Jordan (Law and Order: UK).
As Florence (Joséphine Jobert) leaves the island to spend Christmas with her family, the team welcome Dwayne (Danny John-Jules) with open arms to help solve a murder case. Dwayne comes to realise he's not only met Officer Marlon Pryce (Tahj Miles) before, but he once arrested him! How will the team of old and new faces come together to unravel this murderous crime?
Meanwhile, after vexed fans were left hanging in suspense after the cliff-hanger ending of series ten earlier this year, will they finally discover whether Neville told Florence about his feelings for her? Viewers have watched Neville and Florence's relationship develop over the course of series ten and all will be revealed in the Christmas special with more surprises to come in series eleven.
Danny John-Jules says: "It's always a pleasure going back to the Caribbean. And after four years away, fitting back into the fold should be seamless as I know all the new leading cast members already. I look forward to bringing Dwayne and this tenth anniversary special script to life."
Executive Producer for Red Planet Pictures Tim Key says: "We've been talking about a Death In Paradise Christmas episode for years so we're beyond excited to be finally making one and to be working with Danny again. We can't think of a better place to spend Christmas than in Saint Marie - it's still part of our tenth anniversary year after all!"
Tommy Bulfin, Commissioning Editor, BBC Drama says: "We're so excited to be spending our first ever Christmas in Saint Marie. We are delighted that Death In Paradise will be bringing the sunshine to the festive schedule on BBC One."
Death In Paradise is a Red Planet Pictures production for BBC One made with the support of the region of Guadeloupe and internationally distributed by BBC Studios. The feature length episode is written by James Hall, produced by Candida Julian-Jones, directed by Ben Kellett and will air on BBC One this December. Death In Paradise series eleven will air in January 2022 and series twelve has previously been announced.
All series of Death In Paradise are available on BBC iPlayer.