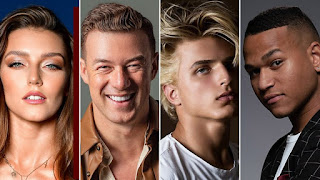 Four new world-class professional dancers will be joining the line up for Strictly Come Dancing when the multi-award-winning series returns this autumn to BBC One, as the nation's favourite dance show once again brings glitter, glamour and glorious dancing to Saturday and Sunday nights.


The dazzling new dancers stepping into the Strictly ballroom hail from all across the globe: South Africa, Ukraine, Poland and the United Kingdom. They are: World Junior Latin American Champion 2010 and former Dancing With The Stars Ireland professional Kai Widdrington; six-time Latin and Ballroom National Champion in Italy and former Let's Dance Germany professional Nikita Kuzmin; reigning South African Latin Champion Cameron Lombard; and Polish Open Latin Champion 2014 and winner of BBC One's The Greatest Dancer 2020, Jowita Przystal.
They join the professional dancers already revealed for the upcoming series: Aljaž Škorjanec, Amy Dowden, Dianne Buswell, Giovanni Pernice, Gorka Marquez, Graziano Di Prima, Johannes Radebe, Karen Hauer, Katya Jones, Luba Mushtuk, Nadiya Bychkova, Nancy Xu, Neil Jones, and Oti Mabuse.
Kai Widdrington says: "This is my childhood dream come true. Watching Strictly from the very first series as a young boy from Southampton and now 18 years later, to be a professional dancer on the show is the most amazing feeling and the biggest accomplishment of my career. I can't wait to step onto the Strictly floor and experience the exciting times that lie ahead."
Nikita Kuzmin says: "I've always been amazed by the magic Strictly Come Dancing brings. No matter what country I have found myself living in, I've never missed a chance to watch it. And joining it as a professional dancer is my big chance to make some magic on the most famous dance floor. I can't wait to give it my all!"
Cameron Lombard says: "Thank you Strictly Come Dancing for this life-changing opportunity. Not only is this a dream come true but a challenge I am accepting with both hands. I am excited beyond imagination and looking forward to leaving my mark on the dance floor!"
Jowita Przystal says: "This is my biggest dream come true. No words can describe how I feel right now. I'm still pinching myself to check if this is real but I am beyond excited to be joining the Strictly Come Dancing family and I can't wait to give all of my heart and soul on that dance floor!"
Strictly Come Dancing returns for its 19th series this autumn on BBC One and BBC iPlayer.
New Professional Dancers Biographies
Jowita Przystal
Twenty six year-old Jowita started ballroom dancing at the age of 12 and is a Polish Open Latin Champion. In 2015 she ended her competitive Ballroom and Latin career to join the cast of touring dance company Burn The Floor, where she stayed for four years before moving to the UK in 2019. Under the mentorship of Strictly Champion, Oti Mabuse, she won the BBC's The Greatest Dancer in 2020, and the prize of performing on Strictly Come Dancing.
Kai Widdrington
Kai, 25, was all set to follow in his dads footsteps by becoming a professional footballer, but aged nine decided to take up dancing instead. By the time he was 14 he became the World Junior Latin-American champion. As well as competing, Kai appeared on Britain's Got Talent in 2012 aged 16 and made it to the final. Kai has been a professional dancer on Dancing With The Stars in Ireland since its first series in 2017. He finished twice as runner-up on the show in 2018 and 2020.
Nikita Kuzmin
Nikita, 23, was born in Ukraine and lived there until he was nine years old when his family moved to Italy to support his sister's dancing career. He started dancing aged four after initially wanting to do karate like his hero Jackie Chan. During his nine years in Italy, Nikita became six-times Italian Champion in Latin and Ballroom. In 2020 Nikita was a professional dancer on Let's Dance, Germany's version of Strictly Come Dancing.
Cameron Lombard
Reigning South African Latin Champion Cameron Lombard, 20, has won eighteen national titles across Ballroom and Latin during his dance career. He started competing aged 6, and within a year he was already winning local and regional competitions. In 2012 he was a finalist on South Africa's Got Talent and in 2019 he represented South Africa at the World Championships.