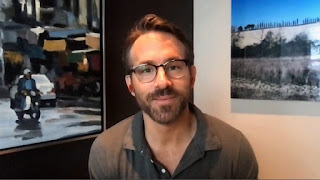 Hollywood superstar Ryan Reynolds has become the latest A-lister to read a CBeebies Bedtime Story, helping to settle the nation's children down ready for bed

Ryan was delighted to join the much-loved programme, even if it had to be by video call, as he reads Maurice Sendak's classic Where The Wild Things Are.
He tells the young audience: "Well hello, I'm Ryan and I can't be with you in the CBeebies House at the moment. But I really want to read you a Bedtime Story, so here I am all the way from the other side of the world in Canada."
Ryan tells the story of Max, who puts on his wolf suit and makes mischief of one kind and another, before travelling by boat to the place Where The Wild Things Are.
He closes the story by saying: "Sometimes even the wildest creatures need to settle down with the people they love and get ready for sleep. Who knows what amazing adventures you'll go on in your dreams tonight? Goodnight wild things, sleep tight."
Ryan follows in the footsteps of a plethora of famous faces to read a Bedtime Story including Tom Hardy, actor Chris Evans, Regé-Jean Page, Felicity Jones, David Schwimmer, Alesha Dixon, Eddie Redmayne, Orlando Bloom, Sir Elton John and Dolly Parton.
CBeebies Bedtime Stories is on each weekday at 6.50pm on the CBeebies channel and is also available on BBC iPlayer. Ryan Reynolds' CBeebies Bedtime Story will air at 6.50pm, Friday 16 July.