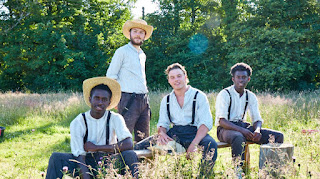 Is modern life bad for us? A major new six-part Channel 4 series, The Simple Life will explore this question, following 24 Brits as they come together to live by the rules of a community who chose to disregard the majority of modern values – the Amish.
The 24 contributors include a social media content creator, a Norfolk rapper, a former soldier, twin brothers from South London and a gay couple – one of whom is head of nursing operations across three NHS hospitals and the other an ex-army media – with their two adopted children. They will be joined in an idyllic countryside backdrop by an Amish family of five from Ohio, home to the largest Amish community in the world.
The community will live off-grid on a 40-acre farm complete with a lake and a wood but without their phones, any form of technology, mains electricity or gas. They will be required to raise a barn and build a pig ark for the impending arrival of their livestock in addition to harvesting over three acres of hay – all in the traditional Amish way, without mechanisation. The community will also need to travel into the local town via horse and cart for supplies and to trade or sell results of the cottage industries they have started. The Amish family will offer the community advice on the day-to-day lifestyle as well as guidance on how to live simply – and ultimately how to find happiness with a more humble existence.
The project will be overseen by world renowned psychologist, Barry Schwartz who, in his bestselling book, The Paradox of Choice, argued that rather than bringing us happiness, the choices available to us in modern life only make us feel more stressed and that too much choice makes us unhappy.
Filmed over a six-month period, a team of British scientists will monitor and evaluate changes in the wellbeing of the community across the filming period – both on the farm and when they return to their normal, modern lives. Will there be a positive impact on the mental and physical health of those taking part or is there a desperate need to get back to their consumerist packed lifestyles?
The Simple Life offers a world where manual labour is central, a world in tune with the environment and a world based on valuing the person within – one based entirely on community and not focussed solely on our own needs.