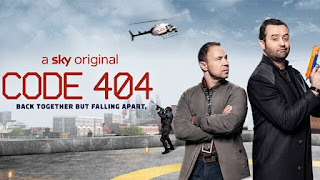 Sky today releases the official trailer for the second series of Code 404, a Sky Original comedy coming to Sky Comedy and streaming service NOW from 1 September.
The crime fighting duo of the future, DI Carver (Stephen Graham) and his AI-driven partner DI Major (Daniel Mays), are back!
Unfortunately, there's still a few bugs to patch out. Having cracked The Juggler case with his long-suffering partner, the resurrected DI Major has finally reached his potential as the top cop in the SIU. But it came at a price. At last realising that his best friend had shacked up with his wife Kelly (Anna Maxwell Martin) while he was "away" (and a bit before), their partnership is over, and the pair go their own ways. But when a 20-year old cold case is reopened, the pair find themselves back together and thrown into the action. With an impending divorce, the return of his long-time absentee dad, and danger around every corner, the pressure seems to be getting to Major and he starts exhibiting strange behavioural glitches. However, much to Carver's concern, the problems are more serious than a typical reboot can solve, and our cyborg hero may be looking at terminal failure.
Code 404 Series 2 features brand new cast members Meera Syal (Elizabeth Churchland) and Clive Russell (Clifford Major) who will be joining the cast. Alongside Stephen Graham, Daniel Mays and Anna Maxwell Martin, returning cast include Michelle Greenidge (Not Judy), Rosie Cavaliero (Dennett), Richard Gadd (Cleasby) and Amanda Payton (Parfit).
Sky Original, Code 404 series 2, all episodes available 1 September on Sky Comedy and NOW