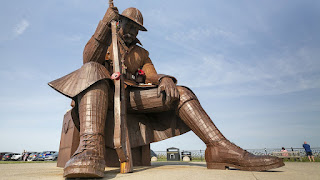 A 1.2 tonne metal sculpture of a soldier reflecting on the horrors of World War One has been crowned the UK's best piece of outdoor artwork.
Ray Lonsdale's 2014 statue, called '1101' to mark the first minute of peace after armistice at 11am on November 11, 1918, is also known as 'Tommy'.
It was initially only meant to be a temporary display but following its unveiling, it became so popular that locals started a fundraising campaign to have it permanently installed.
In 2015, after raising the £102,000 necessary, it was moved to a paved platform in the town, and a time capsule containing donated items, including a letter from Ray Lonsdale, a T-shirt, children's artworks, war remembrances, and a Victory Medal was buried beneath it.
The moving sculpture, in Seaham, County Durham, took top spot following a nationwide poll by Sky Arts to celebrate the launch of its new series, Landmark, which will see a new wave of public art in the UK as the country's best artists compete for the chance to create a brand-new national landmark.
Sky Arts initially asked 1,000 UK adults to share their favourite pieces of free-to-view outdoor artwork, before the list was whittled down to a top 20 by curator, Clare Lilley, one of Landmark's expert judges, before 2,000 adults then voted for their favourites.
Lonsdale's work topped the list ahead of Andy Scott's 'Kelpies', a giant horse installation in Falkirk, Scotland and the 'Uffington White Horse', the chalk hill figure in Oxfordshire.
Making up the top five was 'The Angel of the North', by Antony Gormley, and Martin Jennings' 'Women of Steel' in Sheffield.