Filming underway on series seven of Inside No. 9 as cast is confirmed and first look image is revealed 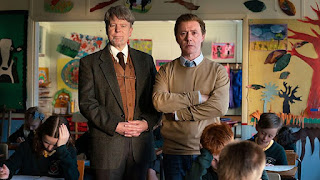 Principal photography is now underway on the seventh series of Steve Pemberton and Reece Shearsmith's critically acclaimed and BAFTA-award winning anthology series Inside No. 9 (6 x 30), plus a first look image of the brand new series is also revealed alongside casting details.

Produced by BBC Studios Comedy Productions and broadcast on BBC Two and BBC iPlayer, the new series of Inside No. 9 will feature six stand-alone stories, once again inviting viewers into Shearsmith and Pemberton's world of the extraordinary and macabre.
Headlining series seven are Daniel Mays (Line of Duty, Good Omens), Jason Isaacs (Harry Potter, The OA), Sophie Okonedo (The Escape Artist, Britannia), Jessica Hynes (There She Goes, W1A), Diane Morgan (Mandy, Motherland), Daisy Haggard (Back To Life, Breeders), Annette Badland (EastEnders, Doctor Who), Siobhan Redmond (The Replacement, Unforgotten) and Ron Cook (Hot Fuzz, The Salisbury Poisonings).
Also set to feature in the upcoming series is Reece Shearsmith and Steve Pemberton's fellow co-creator, writer and star from The League of Gentlemen, Mark Gatiss (Sherlock, Dracula).
Reece Shearsmith and Steve Pemberton say: "We hope you'll join us and another incredible cast of actors for more surprises that will make your jaws drop and spines tingle. Heads might even roll, and if not heads, definitely eyes."
Gregor Sharp, Commissioning Editor at the BBC, says: "Inside No. 9 is a crown jewel of comedy and we can't wait to see what twisted gems Reece and Steve have in store for us in the new series."
Josh Cole, Head of Comedy, BBC Studios Production, says: "It's a joy to be back in the Inside No. 9 saddle. Reece and Steve are comic masters, and their new scripts are better than ever. Which really is saying something when the last bunch won Best Comedy at the BAFTAs!"
Since its launch in 2014, Inside No. 9 has received widespread critical acclaim and has won an enviable étagère of awards, including the comedy prize at the 2016 Rose d'Or, two RTS Awards and two BAFTA TV Craft Awards (including Comedy Writing), South Bank Show and Writers' Guild awards. In addition to this, Steve Pemberton won the Best Male Performance in a Comedy Programme at the 2019 BAFTA TV Awards and the series won Best Scripted Comedy at the 2021 BAFTA TV Awards.
All previous episodes of Inside No. 9 are available to watch now on BBC iPlayer and series seven will premiere on BBC Two and BBC iPlayer in 2022.
Posted by JD at 09:22