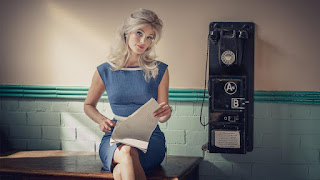 Production swings into action on an adaption of Nick Hornby's novel Funny Girl. This Sky Original sees Gemma Arterton step into the shoes of charismatic Barbara Parker. Joining Arterton on set in Liverpool are Rupert Everett (My Best Friend's Wedding, Adult Material), as Barbara's agent Brian Debehnam, David Threlfall (Shameless) as Barbara's father, George, and Tom Bateman (Behind Her Eyes, Murder on the Orient Express) to star as dangerously charming actor Clive. The Sky Original comedy drama will be available on Sky Max and streaming service NOW in 2022.
Also joining the cast will be, Emily Bevans (Temple, Grantchester, Soulmates), Leo Bill (Becoming Elizabeth, Rare Beasts) and Matthew Beard (Vienna Blood, Avenue 5), alongside previously announced Clare-Hope Ashitey (Riviera, Top Boy), Arsher Ali (Informer, The Fear Index) and Alexa Davies (White House Farm, Mamma Mia: Here We Go Again!).
The new Sky comedy drama series is about a young woman from Blackpool finding her comic voice in the male dominated world of the 1960s sitcom. Bold, stylish, and courageous, Gemma Arterton stars as Barbara Parker - the force of nature who takes London by storm. Her journey from Blackpool beauty queen to comedy superstar and nation's sweetheart is set during the cultural explosion of the 1960s.
It's the height of the swinging 60s and Barbara Parker has just been crowned Miss Blackpool – but there's got to be more to life than being a beauty queen in a seaside town, right? She wants to be… someone. The bright lights of London are calling, and our determined hero sets off to find out who that someone is.
The London she encounters is not as quite as swinging as the one she'd read about and seen on TV. However, after a series of setbacks Barbara finds herself in unfamiliar territory - an audition for a TV comedy show. Barbara's uncompromising northern wit proves to be the X factor that the show has been missing. She gets the part and becomes part of a ground-breaking new sitcom which will have an impact on British comedy for decades to come.
Being a woman in a largely male environment has its own challenges, but as Barbara 'finds her funny' she re-defines the prevailing attitude to funny women and in the process, reinvents herself.