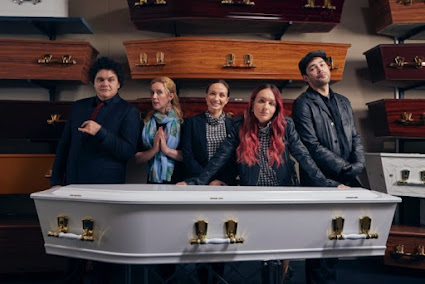 You’ll be dying with laughter as Good Grief the latest comedy sensation from New Zealand , hits UK TV on 30 September with its premiere exclusively on Sundance Now via Amazon Prime Video Channels.

With a second series already commissioned to premiere next year, the laugh-out loud six-part series comes to the UK and follows the lives, loves,  deaths and disasters of two differing sisters who are thrown together when they inherit their late grandad’s funeral parlour.

A new comedy force to be reckoned with, real life sisters Eve and Grace Palmer take the leads and also co-write this cleverly observed, brilliantly wry series that chimes perfectly with the current run of outstanding comedies championing strong female talent. Channelling Six Feet Under themes with Stath Lets Flats and This Country humour, this fish-out-of-water comedy series might just be the funniest show to come out of the country since Flight of the Conchords.

With no idea how to run a funeral home – or the oddball staff that work there – Ellie (Eve Palmer, Jawbone) and Gwen Good (Grace Palmer, Shortland Street) are thrust into a world of embalming, emceeing, and extreme embarrassment. Recently fired from her teaching career, Ellie starts to warm to the job, while all Gwen wants to do is escape to Bali and become a DJ. But facing death every day gives Ellie and Gwen the chance to reassess their own lives and out of the sadness they face comes laughs aplenty.

Eve and Grace Palmer said, “They say ‘if you don’t laugh, you’ll cry’ but we hope that in watching this dark comedy about life and death, you’ll be able to do both.”

Good Grief, Season 1 is co- created and co-written by Eve and Grace Palmer along with co-creator/co-writer Nick Schaedel, directed by Kiel McNaughton (The Legend of Baron To’a, My Life is Murder), and produced by Angela Cudd (I Am Waru) and Kerry Warkia (Vai, Waru). Season 2 has been co-commissioned by AMC Networks’ IFC and Sundance Now from Kiel McNaughton and Kerry Warkia’s Brown Sugar Apple Grunt Productions Ltd.