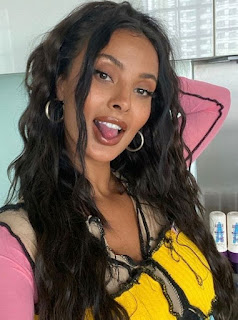 Acclaimed broadcaster Maya Jama will take the helm as presenter of brand-new show Walk The Line when the show debuts on ITV and ITV Hub later this year.
Maya joins Simon Cowell on the new format, which is co-produced and co-developed by Syco Entertainment and Lifted Entertainment, part of ITV Studios.
Maya Jama is one of the hardest working and most exciting presenters in the industry. She set a new record as the youngest ever host of the MOBO Awards, she hosted the EE BAFTA film red carpet, ITV's Brit Awards Backstage show, Stand up to Cancer and Comic Relief. She's recently been on TV screens presenting Save Our Summer and Glow Up. She's a regular on Celebrity Juice, Celebrity Goggle Box and on the panel of ITV's award-winning show Don't Hate the Playaz. She then recently made her acting debut as Brenda in Katherine Ryan's Netflix series 'The Duchess'.
Walk The Line is a high-octane series offering music acts a chance to win a life changing prize pot of £500,000. The musical acts - be they soloists, duos, bands, or choirs - will take to the stage to perform for the nation, as well as Simon Cowell and a panel of judges to be confirmed in due course.
But to win the money, talent alone isn't enough - the contestants will need nerves of steel as they determine whether to cash out or physically Walk The Line and risk it all to stay in the competition.
Maya Jama said: "If someone said to me, describe your dream job. It would be this! I literally couldn't be more excited to be working with Syco, Lifted Entertainment and the incredible team at ITV on Walk The Line."