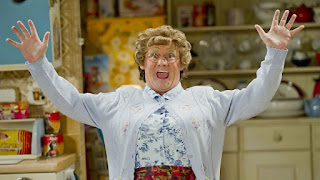 There's spooky going's on in the Brown household where anything can, and probably will happen.
Originally a theatre production, Mrs Brown's Boys is created, written by and stars Brendan O'Carroll as misbehaving matriarch Agnes Brown, who just can't help interfering in the lives of her family and friends. The show was first broadcast on BBC One in 2011 and has since become one of biggest comedies on tv. In summer 2016 Mrs Brown's Boys was broadcast live for the first time on BBC One.
Mrs Brown's Boys was voted best sitcom for the 21st century in a Radio Times poll and has won numerous awards, including a Bafta for best scripted comedy (2012), the Writers Guild Great Britain Award (2014) and has won an incredible five National Television Awards for the most popular comedy TV programme (2013 - 2020).
Brendan O'Carroll says: "It's a huge thrill to do another 'live' show for the BBC. It'll be so wonderful so see them nervous all over again. We will be trying our best to stick to the script, but honestly a script is just a guideline Ha ha ha!! Bring it on!"
Charlotte Moore, Chief Content Officer, BBC, says: "I'm thrilled that we are marking the 10th anniversary of the award-winning Mrs Brown's Boys coming to BBC One with this very special live broadcast. A huge thank you to Brendan and the team for keeping us all so brilliantly entertained for a decade. I can't wait to see what mischief Agnes and family have in store for us this Halloween."