Russell T Davies to return as Doctor Who showrunner 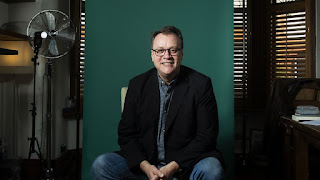 Russell T Davies will make an explosive return to screens to celebrate the 60th Anniversary of Doctor Who in 2023, and series beyond. BBC Studios is partnering with Bad Wolf to produce.
Responsible for Doctor Who's revival in 2005, Davies is credited with propelling the show into a global phenomenon and making it one of TV's biggest hits.
His tenure on the show oversaw a surge in popularity, enjoying huge acclaim and success. The Doctor won the nation's hearts through his masterful relaunch, which led him to create two spin-off series, Torchwood and The Sarah Jane Adventures, during that time.
Davies left the show in 2009. A lifelong Doctor Who fan, he has most recently achieved huge success with Years And Years, A Very English Scandal and It's A Sin, which won Best New Drama at the National TV Awards this month.
Russell T Davies says: "I'm beyond excited to be back on my favourite show. But we're time-travelling too fast, there's a whole series of Jodie Whittaker's brilliant Doctor for me to enjoy, with my friend and hero Chris Chibnall at the helm - I'm still a viewer for now."