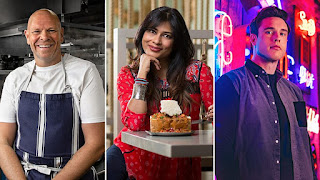 The BBC's Great British Menu has today confirmed a new judging panel for the next series, which will be made up of Chef's Tom Kerridge and Nisha Katona, and comedian and host of a popular food podcast, Ed Gamble, when it returns to BBC Two in early 2022.


Great British Menu will begin filming for the thirteenth series this autumn when Tom, Nisha and Ed will join host Andi Oliver to judge heats across the UK. The most talented chefs from across the UK will battle it out for the chance to cook at a banquet that, in the year of the BBC's centenary, will celebrate British creativity through 100 years of television broadcasting.
Tom Kerridge, Chef, says: "I am so thrilled to be judging Great British Menu, it holds such a special place in my heart having cooked at the banquet twice. I've been through it, I know the pressure, the highs and the lows, which is what makes it such a brilliant competition and a great show. I can't wait to meet the chefs and see some of the UK's finest talent shine."
Nisha Katona, Chef and Restaurateur, says: "What an absolutely delicious privilege it is to make the ranks of judge on the Great British Menu! As a chef with restaurants across the country I have always been so invested in the sublime skills of our culinary regions. Their virtuosity and artistry has always blown me away and to join the happy GBM tribe is nothing less than a dream come true. Pass me a fork!"
Ed Gamble, Comedian and host of food podcast Off Menu, says: "It's a great honour to be asked to judge on this shining jewel in the BBC's crown. I've been in strict training for the show by eating full meals every hour. Good news: I love food. Bad news: I eat with my mouth open."
Oliver Peyton and Matthew Fort will leave the programme as judges after 15 years, as will Rachel Khoo who featured as a judge in series 12