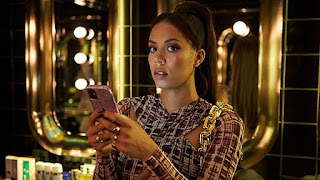 Adapted as a 6 part series, Superhoe is a ground-breaking new drama for BBC Three with a killer original soundtrack performed by Lecky.
Alongside Lecky - who takes the leading role of Sasha Clayton - the cast includes Lara Peake (Brave New World), Jessica Hynes (Years and Years), Paul Kaye (Game of Thrones), Mia Jenkins (Hanna), Jordan Duvigneau (My Mum Tracy Beaker), Flo Wilson (Death In Paradise), Jordan Myrie (Stephen), Jason York (Sliced), Chantelle Alle (Vera, We Are Lady Parts), Ebony Aboagye (The Lost Girls) and Mohammad Dalmar in his first TV role. There are also guest appearances from names such as Sai Bennett (Mr Selfridge), Tom Moutchi (Famalam), Kiell Smith-Bynoe (Ghosts), Tom Stourton (Horrible Histories) and Renee Bailey in her first TV role.
Told in part through the songs that she creates, Superhoe follows Sasha, a 25-year-old wannabe singer and rapper. She wants to be a major recording artist, but right now she's a bedroom artist: spending her days smoking weed and stalking her ex-boyfriend (Duvigneau) on Instagram, and avoiding her mum (Hynes), her step-dad (Kaye) and sister Megan (Jenkins).
When she is kicked out of her family home, Sasha is forced to fend for herself, sofa-surfing with local dealer Saleem (Dalmar), until she moves in with party girl Carly (Peake), who introduces her to the exciting world of social media influencing. But as the gap between her online presence and her dream of being a singer continues to grow, Sasha finds herself struggling to escape a world that is more complex and darker than she could have imagined.
Nicôle Lecky says: "Superhoe started as a one woman play and I had such a joy creating the world and performing these characters. Working with Shaheen Baig and the team to bring them to life on screen has been a dream. I cannot wait for everyone to see our super talented cast and live every moment with Sasha and them."
Lucy Richer, Senior Commissioning Editor, Drama says: "We're beyond thrilled about Superhoe. Nicôle is a creative genius and she blazes onto screen as Sasha in a ground-breaking original drama we couldn't be more proud of."
Margery Bone, Executive Producer for Bonafide says: "Ever since I first read the stage play this has been the most incredible journey to go on with the amazing talent that is Nicôle Lecky, along with all our fantastic team who have brought this show together so brilliantly."