Doctor Who Series 13 - Interview with John Bishop and Jacob Anderson 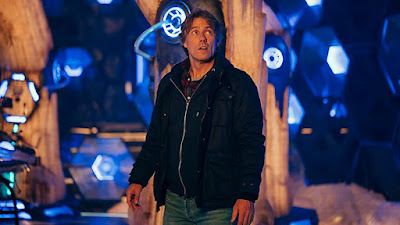 
What did it mean when you got the call to be a part of Doctor Who?
It meant I could get out of the house and not be stuck in with COVID (laughs)! I'll be honest I don't know how big an impact this will have on my life or anything like that as it's not come out yet, but as a life experience it's one of the best things that I've done since I've managed to get into this world of showbusiness. I genuinely feel I've learned a lot and I genuinely feel I've made good friends, and I didn't think that I'd come away with that.
What are the main differences between being in Doctor Who and your role as a stand-up?
The longevity, the fact you spend so much time with them, you genuinely create bonds with people. And the fact you're part of a team.
Most of what I do is me, or 'The John Bishop Show' - me on the stage on my own or leading something on my own. For this I was part of something and I wasn't the most important part which was good! In many respects the actors themselves are not the most important thing, there are so many other things that happen before that camera gets turned on and I came away with that appreciation for the skill of so many others.
How has the response been from fans so far?
So far it's been positive but they haven't met him (Dan) yet! I think, for me, I have been given a glimpse that once you're in Doctor Who, you're fixed in time in the eyes of a lot of people because they'll come to it at different times in their lives and at different ages. And so of all the things I've ever done, it might be the thing that lasts the longest.
Can you tell us a bit about Dan and what you liked most about him?
I liked his humility, his willingness to help people, when we first start off he is working in a food bank. I liked his vulnerability, he's not really lucky in love, I liked his caring nature because he cares deeply for the Doctor and Yaz and wants them to be happy. I liked his sense of what's right and what's wrong. He's really prepared to stand up to those who are doing something wrong.
How did you enjoy working with this year's guest actors?
I loved spending time with Jacob Anderson, Kevin McNally was great - it's like a masterclass all the time with Kevin. Paul (Broughton) and Sue (Jenkins), I had a few scenes with them and it was absolutely brilliant watching them work. During one scene, I had to remind myself they were acting!
Why should audiences tune into series thirteen and can you sum it up in three words?
Fast, energetic and heartfelt. 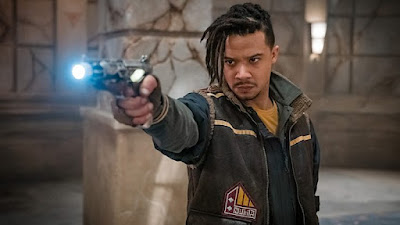 
Can you tell us about what it meant to get the call to say you'd be in Doctor Who? What was your reaction?
It was a complete surprise, it felt like it was completely out of the blue. But it was one of those things that I always wanted to do. There are certain goals or dreams you might have in your life and the minute you stop obsessing over them, that's when they happen! I had no expectation at all of being asked to be part of it, and Chris swooped in and asked if I'd like to be part of this iconic show that means a lot to me.
What's the difference between Doctor Who and other sets you've been on?
It actually feels like walking into somebody's family home. Everybody knows and cares about each other and you can tell that this is a group of people who have spent a lot of time with each other and would choose to continue to. There are some people who have been working on the show for fifteen years and you feel that, but you can also feel Jodie and Chris' influence on the environment. It's just a really welcoming, comfortable, warm place to work.
Are there any big moments in Doctor Who history that stood out to you? Who was the Doctor that got you into the series?
My first Doctor was Sylvester McCoy, he was great and kind of kooky and a bit curmudgeonly as well - I'll always have a special place in my heart for him. But David Tennant is just charisma to eleven, I think he's fantastic and really defined a modern day depiction of the Doctor, so he's probably my favourite before seeing Jodie.
I think Jodie does such a wonderful job; she does things with the character that are subtler than she gets credit for sometimes. She puts so much pathos into this alien. The Doctor can sometimes be quite clownish, skittish and jumpy and that's really a part of the charm that she can do that, but she also has the tragedy of their life and it is all contained in it. She plays it in a really beautiful subtle performance, I really enjoy her Doctor. She makes it look effortless!
Can you tell us about who you enjoyed working with?
I really enjoyed working with Craig Parkinson, I knew him a bit before but this is the first time we've worked together. Thaddea is amazing, she's an incredible actor, Mandip is one of my favourite human beings ever. Her and Jodie are like the same person but also the inverse of each other, they're so similar but then also completely opposite. Being around them as a team is a joy, a proper joy.
How has the reaction been from fans?
I tend to hide a bit whenever there's any type of announcement but in the immediate announcement, I saw some really nice 'welcome to the family' type tweets from Whovians: 'Welcome to our crazy family, it's going to be an adventure!' I really appreciated that and thought it was really nice. It was really nice to be welcomed, so I zoned into that and I really appreciate it.
Can you tell us a bit about Vinder?
I really hope people like Vinder, as a fan of the show and as a fan of those characters that come in and recur and are part of the story beyond their singular story, there are some really iconic characters. Like River Song, and Osgood and all these people you really remember and I hope Vinder can be a part of that, I really hope people like him.