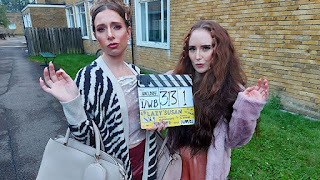 Made by award-winning Tiger Aspect (part of Banijay UK) the series has just finished shooting on location in Watford. Also released today is a first-look image and the supporting cast has been revealed from the forthcoming new series.
From the minds of writer-performer Edinburgh Comedy Award nominees Freya Parker (The Mash Report) and Celeste Dring (This Country), Lazy Susan is a fresh and unique sketch show. Originating at the Edinburgh Fringe to five-star reviews and sold-out performances, the duo were commissioned to create and star in the BBC Three pilot which aired in 2019, to critical acclaim.
Freya and Celeste (Lazy Susan) return with well-loved characters from the BBC Three pilot, including Megan and Michaela who "don't want any drama" and an achingly whimsical French woman, alongside some brand-new creations - a pair of inhumanly peppy Radio DJs, a couple of lads from Middlesbrough - all brought to life with joyful, sharply-observed performances. Expect smart commentary on our modern world and people falling over. Welcome to the world of Lazy Susan - as inviting as a warm bath, as unpredictable as a soufflé. Sketch comedy with heart, soul and just the right amount of weird.
The supporting cast of the new series features a plethora of comedy talent including James Acaster, Lou Sanders, Kiell Smith- Bynoe, Jason Forbes, Catherine Bohart, John Kearns, Evelyn Mok, Luke McQueen, Sunil Patel, Shivani Thussu, Ellie Kendrick, Rajiv Karia, Anna Leong Brophy, Laura White, and Phil Dunning.
Celeste Dring and Freya Parker of Lazy Susan say: "We couldn't be more grateful to everyone who worked so hard on this show, especially our wildly talented director Molly Manners. Thank you BBC for the opportunity!"
A transmission date will be announced in due course.