Legendary Foo Fighters’ frontman Dave Grohl is the latest in the stellar-line up of CBeebies Bedtime Story readers. 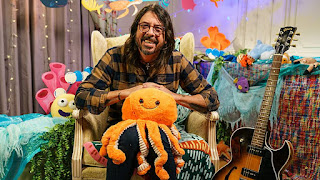 Dave Grohl is to entertain the nation's children with a CBeebies Bedtime Story based on the lyrics of the world famous Beatles song, Octopus's Garden.
Written by Ringo Starr and with pictures by Ben Cort, the book follows five children on a magical journey through the Octopus's garden. The playful Octopus takes them on a wondrous underwater adventure, riding on the backs of turtles, playing pirates in a sunken city and sheltering from a storm in the octopus's cave.
This is the first of two stories the star has recorded for the pre-school channel and it will air on Friday 8 October.
Dave says: "As a proud father of three, I've always enjoyed reading stories to my children. It was a pleasure to read these stories for CBeebies."