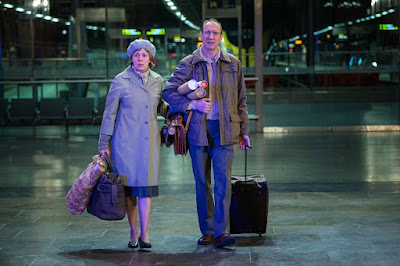 Sky today reveals the first look trailer and confirms the premiere date for highly anticipated Sky Original drama Landscapers, an exhilarating and darkly funny exploration of love and fantasy starring Olivia Colman and David Thewlis. The Sky Original will premiere on Sky Atlantic and streaming service NOW on Tuesday 7 December.
Olivia Colman (The Favourite, The Crown) and David Thewlis (I’m Thinking Of Ending Things, Fargo) play husband and wife pair, Susan and Christopher Edwards, alongside Kate O’Flynn (Bridget Jones's Baby), Dipo Ola (We Hunt Together), Samuel Anderson (The History Boys), David Hayman (The Boy in the Striped Pyjamas), Felicity Montagu (I’m Alan Partridge) and Daniel Rigby (Eric and Ernie, Flowers).
Inspired by real events, the four-part Sky Original limited series is created and written by Ed Sinclair and sees writer-director Will Sharpe (The Electrical Life of Louis Wain, Flowers) bring his singular vision to the story. Landscapers is the latest project from SISTER in association with South of the River Pictures for Sky Studios and HBO after the multi-Emmy and BAFTA award-winning hit Chernobyl.
Landscapers is a co-production between Sky and HBO. NBCUniversal Global Distribution handle international sales of the series on behalf of Sky Studios. 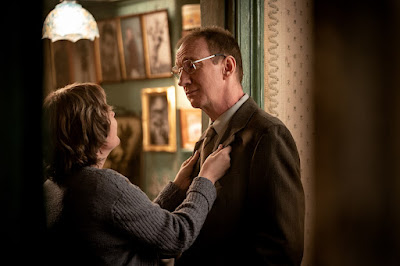 Synopsis:
Landscapers tells a unique love story involving a seemingly ordinary couple who become the focus of an extraordinary investigation when a couple of dead bodies are discovered in the back garden of a house in Nottingham.
Mild-mannered husband and wife Susan (Colman) and Christopher Edwards (Thewlis) have been on the run from reality for over 15 years. When Christopher makes a startling call home to his step-mother, their role in a terrible crime that remained undiscovered for over a decade begins to emerge into the light. As their relationship is subjected to the glare of a full police investigation, the devoted couple are separated for the first time in their marriage.​
As the investigation moves forward, inspired by Susan’s obsession with old Westerns and classic cinema the fantasists cast themselves as Hollywood heroes in narratives of their own invention.  Powered by Susan’s extraordinary imagination, Susan and Chris’s fantasy world provides a much needed sanctuary from real-world horrors and their own clawing guilt, but also threatens to undo them completely.
Posted by JD at 14:37

Email ThisBlogThis!Share to TwitterShare to FacebookShare to Pinterest
Labels: Landscapers