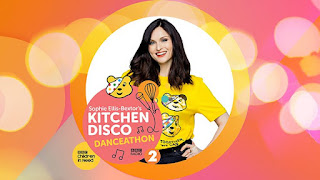 On Radio 2 this morning, Zoe Ball announced Sophie Ellis-Bextor's Kitchen Disco Danceathon where Sophie will attempt to dance for 24 hours for Radio 2's BBC Children in Need Challenge 2021.
It launches at 9.25am on Tuesday 16 November, finishing the following day at 9.25am on Wednesday 17 November.
Sophie's Kitchen Disco became a huge sensation throughout the lockdown of 2020, lifting people's spirits as they joined her, dancing and singing in their own kitchens across the UK. Since May last year, multiplatinum selling Sophie has also hosted several Kitchen Disco shows on Radio 2 and BBC Sounds.
Sophie says: "I love to dance, I love to 'Kitchen Disco', but can I keep going for a whole 24 hours? I'm sure I can for BBC Children In Need... with the support of Radio 2's fantastic listeners!"
Helen Thomas, Head of BBC Radio 2, says: "Sophie's Kitchen Disco has uplifted everyone and spread so much joy over these past 18 months, so what better way to keep the nation entertained than with an extended Kitchen Disco Danceathon for BBC Children In Need 2021. I'm so proud of Radio 2's ongoing partnership with the charity, which has raised over £50.2 million across the past 10 years."
During the danceathon, Sophie won't be alone as she'll be joined in person and via videolink by a host of celebrity guests - including Radio 2 presenters - throughout the 24 hours. They'll give her huge support and encouragement to complete the challenge and help raise funds for BBC Children in Need. The danceathon is taking place at the BBC Radio Theatre in London. There will be regular updates on Radio 2 throughout the day and viewers can watch it live on the Red Button and BBC iPlayer across the 24 hours.
Audiences can give via text, send their own messages of support to Sophie and donate online through www.bbc.co.uk/sophie. The money raised will go towards supporting children and young people across the UK facing a range of disadvantages.
Ten classic editions of Sophie's previously broadcast Kitchen Discos are now available to hear on BBC Sounds.
Simon Antrobus, BBC Children in Need Chief Executive says: "The past 18 months have been incredibly difficult and have sadly made the lives of children and young people facing disadvantage that much harder. We want to ensure no child feels alone, and that every child is supported to thrive, so we are delighted that Sophie is taking on such a monumental challenge to help make a difference. It's acts of kindness like this that help children and young people across the UK know that we are here for them, and that there is always hope. We will be cheering Sophie on every step of the way!"
Sophie's challenge follows in the footsteps of 2020's Joe Wicks 24 Hour PE Challenge which raised over £2.5 million for BBC Children In Need. Also last year, the station brought together some of the most iconic global artists for the official BBC Children in Need single, a reimagined cover of Oasis' Stop Crying Your Heart Out (BBC Radio 2 Allstars). Performers included Cher, Clean Bandit, Mel C, Jamie Cullum, Jess Glynne, Sheku Kanneh-Mason, Lenny Kravitz, Kylie Minogue, Gregory Porter, Nile Rodgers, Jay Sean and Robbie Williams and many more. The single, curated by Radio 2's Head of Music, Jeff Smith, was recorded and filmed by artists in locations across the world and was produced by Grammy award winning producers Mark Taylor and Brian Rawling.
In 2019, Rylan undertook a 24 hour The Great Ka-RY-oke Challenge, which helped Radio 2 raise over £2m for the charity, and in 2018, Radio 2's Good Morning Sunday presenters Rev. Kate Bottley and Jason Mohammad took on a swimming challenge in the cold waters of Salford Quays.
Also on Radio 2, in his Sunday (11am-1pm) show in October, Michael Ball launched the search for nominees for this year's Sir Terry Wogan Fundraiser of the Year Award. The winner will be announced on the BBC Children in Need Appeal show on BBC One on Friday 19th November. Additionally, on that day all the music played on Radio 2 between 7am and 5pm will be chosen by various BBC Children in Need projects from around the UK – a different project each hour.
BBC Children in Need's vision is that every child in the UK has a safe, happy and secure childhood and the chance to reach their potential. The charity will realise this vision by supporting, promoting and publicising work that addresses the challenges that children and young people face and work that builds their skills and resilience. BBC Children in Need is currently supporting over 2,500 local charities and projects in communities across the UK that are helping children and young people facing a range of disadvantages such as living in poverty, being disabled or ill, or experiencing distress, neglect or trauma. Further information on BBC Children in Need can be found at bbcchildreninneed.co.uk