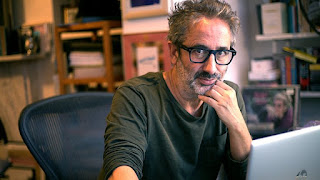 David Baddiel: Social Media, Anger and Us follows the writer and comedian as he explores the impact social media is having on our behaviour both on and offline.
A self-confessed Twitter addict, David's in no doubt there are positive sides to these platforms - revolutionising communication, highlighting important issues and propelling social change. But he also believes there's a darker side to the way we interact online - one where outrage and angry exchanges frequently dominate. And that this negativity is spilling off line and into real life. In this film he'll be asking whether something originally designed to help us talk to each other leads to everyone shouting at each other?
Throughout the programme David puts his own social media behaviour under the microscope, analysing the angry and hateful tweets he receives, interrogating his brain's responses to these messages in an MRI scan and going cold turkey for a fortnight to see if a life free of social media leads him to enlightenment.
He meets prolific users, writers and experts, who both love and hate the medium, and are trying to understand what the platforms do to us. He explores whether the new instant justice meted out by social media - what some call cancel culture - is a new type of mass democracy or just mob rule; and uncovers a shady world of fake accounts and bots spreading uncertainty and misinformation. We see David meet individuals whose lives have been broken by online trolls, including one Tik-Tokker whose house was arsoned.
David Baddiel: Social Media, Anger and Us, will find out if the clear water between real life and our life on the screen has already dried up, and what this blurring of lines means for all of us.
David Baddiel says: "David Bowie, in 1999, said, of the internet, this will change everything. As ever, Bowie was a prophet. Because what seems like just a means of communication has completely changed how we communicate. Social media in particular, seems to have raised the temperature of every type of utterance. I'm hoping this film will add to the understanding of all this and not the anger. But I'm still expecting to be shouted at online about it, of course."