E4 to turn up the heat with Celebrity Cooking School 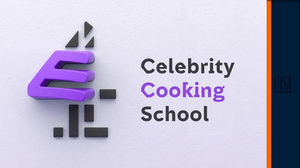 E4 is opening the doors to an all-new Celebrity Cookery School, dropping a group of self-confessed, oven-shy celebs into the dining deep end.  But they shouldn't worry because they are about to embark on a culinary course like no other, run by a seriously talented chef, who'll teach our stars the skills they need to conquer the kitchen and their foodie fears.
Co-produced by Sony Pictures Television's Electric Ray and Motion Content Group, this 8X60' series will test our celebs both emotionally and physically. All they'll know about food to start with is how to order it, but working solo and matched in pairs, an intensive cookery crash course will have them sweating it out in the kitchen as they compete against their fellow celebs in a series of hilarious cooking challenges.  They'll need to master crucial cookery techniques and gain confidence if they're to be crowned Top of The Class at the end of the series.  But if they don't impress, they'll get an F for Fail and leave school for good.
Vivienne Molokwu, Commissioning Editor from Channel 4 said: "In this glossy new celebrity cooking show with a reality twist, we're welcoming those whose cooking past is littered with culinary catastrophes, but it's not all about seeing them fail (although there will be some hilarious hiccups), it's about showing them and our young viewers that the joys of cooking aren't actually beyond their reach. "
Meredith Chambers from Electric Ray said: "This show is for everyone who can't boil an egg and would love to see funny celebs falling apart in the kitchen just like them.  But in the end, we predict some of our stars will be pulling something surprisingly delicious out of their oven."
Martin Oxley, Head of Formats and Entertainment UK for Motion adds: "Watching an array of celebrities under pressure is always good fun and E4, and Electric Ray have reminded us there is nothing better than seeing egos tackle culinary disasters (and surprise us with some delights!) that are bound to follow".