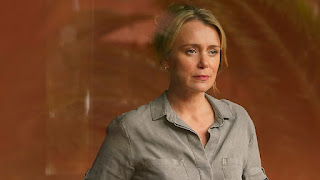 Filming has begun on Crossfire, a major new three-part BBC One and TVE drama starring Keeley Hawes (Finding Alice, It's A Sin, Bodyguard) from Dancing Ledge Productions, the makers of the hugely popular The Salisbury Poisonings.
Created and written by Louise Doughty (author of Apple Tree Yard), her first original series for television, Crossfire is set in a luxurious resort in the Canary Islands. It is being made in co-production with Spanish free-to-air broadcaster TVE, in a deal struck by Fremantle, and in association with Buddy Club Productions.
Sunbathing on her hotel room balcony while on a dream holiday with her family and friends, Jo's (Keeley Hawes) world is turned upside down when shots ring out across the complex. Gunmen, out for revenge, have, in an instant, turned a slice of paradise into a terrifying heart-breaking hell.
A story of survival and resilience, Crossfire is an edge-of-your-seat nail-biting thriller yet also emotional, intimate and relatable. With the unsuspecting holidaymakers and hotel staff forced to make monumental split-second life or death decisions, the consequences will linger long after the final shots are fired.
Crossfire will also star Josette Simon (Small Axe, Riviera), Anneika Rose (Deadwater Fell, Line of Duty), Lee Ingleby (The A Word, The Serpent Queen, Criminal UK), Daniel Ryan (The Bay, Home Fires), Vikash Bhai (The Stranger, Limbo), Hugo Silva (Nasdrovia, The Cook of Castamar), Alba Brunet (Operation Mincemeat, Paraiso, The Mallorca Files), Shalisha James-Davis (Alex Rider, I May Destroy You) and Ariyon Bakare (His Dark Materials, Good Omens).
It is directed by Tessa Hoffe (Kin, Wayne, Majority), and produced by Alex Mercer (Inside Man, Doctor Who).
Keeley Hawes says: "I'm so excited to be embarking on this brilliantly compelling and propulsive drama for the BBC, especially as it's the third production for Buddy Club. Filming has already begun and we're delighted to be collaborating with the team at Dancing Ledge Productions and Louise Doughty on her first original production for television."