Ten contestants join host Craig for their chance to win a life-changing cash prize. Every week, there's an incredible £1 million up for grabs, including a £100K bag. In each show, players are hoping that they'll be randomly selected to take their place in front of the money belt for one of the three head-to-head battles. Whoever banks the most cash in each round will compete in the 'triple-header', a tense three-way battle in which whoever grabs – or steals – the most cash will play to win it all in the Moneybags final. There's mega money at stake, but who will grab it? And more importantly, can they hold onto it?
We chatted to Craig to learn more about the game, his own quizzing skills, and his multi-skilled work life from Red Dwarf to radio DJ. 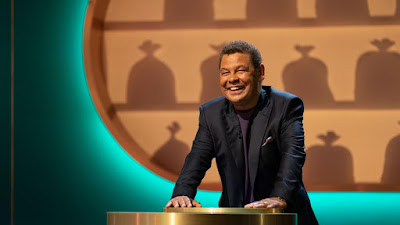 Email ThisBlogThis!Share to TwitterShare to FacebookShare to Pinterest
Labels: Moneybags