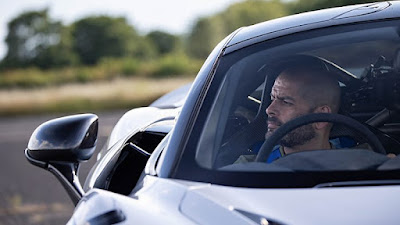 Q&A with Chris Harris
How did you find the race against the Formula 1 drivers at Silverstone?
First, congratulations to the production team for getting us access to the track on an F1 weekend. That doesn't happen very often. It was magnificent to be there. They gave us three drivers who were willing and full of banter, which was great. They could have said nothing, but they were terrific fun.
Did you have a good time in Iceland?
Absolutely. I loved driving around Iceland in a blue Vauxhall Chevette. There aren't many better-looking places on the planet than Iceland. The landscape is outrageous. It reminded us that even though we love filming in the UK and we have made the best of it over the past 18 months, we need to go abroad again because Top Gear is about selling a dream and that involves travel.
Talk us through the film you made about the DMC DeLorean.
John DeLorean is one of the most interesting characters in motoring history. They recently made a big film about him, and it's 40 years since the car first went on the market. The car stars in Back to the Future. It's the most famous film car in the world, even more famous than James Bond's Aston Martin DB5. Of course, the DeLorean is a terrible car. It had flopped by the time Back to the Future came out, and that's the joke in the film. "You've made a time machine." Pause. "Out of a DeLorean!" The great sadness, of course, is that if only DeLorean could have kept the business going for another two years, it might have been the best-selling car in America because of the film.
What did you discover when you filmed at the old DeLorean factory in Belfast?
It's a remarkable story. We spoke to some engineers and people who worked on the shop floor. At that time in Northern Ireland, during the troubles, the fact that Protestants and Catholics worked together on the DeLorean Factory floor without any issues was remarkable.
How did you find it driving a DeLorean?
It's a car I've always wanted to drive because it's such a dreadful motor vehicle. Its physics is all wrong. It's one massive ego trip of a car. It's a story of an ego running out of control, which I love. The moment you get people who have proper charisma and ego and can hoodwink the government into giving them a few quid, just sit back and enjoy the results!
Why do you think these more serious stories work on Top Gear?
Each one of us has an opportunity to take a subject, and maybe deal with it without having to put on the clown shoes and be funny the whole time. Those are the pieces that earn us the right to go and muck around as a threesome. That's the light and shade of the show.
Were you daunted by the chilli challenge in the middle of nowhere?
Yes. I kept thinking, "we have got to film all day tomorrow, we're in the middle of a moor and we don't have any facilities." The next morning on that moor was a disaster. We were complaining non-stop about how we were feeling!
Why does the chemistry works so well between the three of you?
On Top Gear, you want both your co-hosts to be using one arm to hug you and the other to rabbit-punch you. That works very well with the other two because they're total idiots!
--- 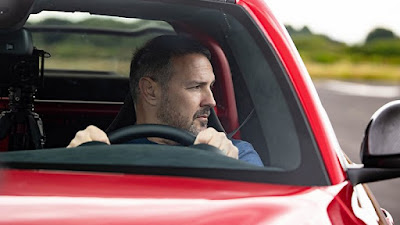 
For the new series, you have made a very touching film with the stunt motorcyclist Eddie Kidd OBE…
It was great to make that because there will be kids out there who have never heard of him. He had an amazing career. Even though I'm a huge fan, I wasn't aware he had stunt doubled for James Bond and Harrison Ford. The mad thing is that, apart from the grey hair, he still looks the same. He's a very good-looking bloke. He's still got a twinkle in his eye and a naughty sense of humour. He has just spent two days trolling me. It's happening all the time!
But the celebration we did for him was tremendous. I think for his family and the stunt riders who performed it was a big moment. Eddie had no idea that he was the reason all those performers got into it. That sequence is a terrific journey. It's very cinematic and the music's great. It's a treat of a film.
Tell us about the 'hot lap' where you have to eat increasingly spicy chillies while driving round a circuit.
I'm the worst person in the world with spice. I struggle with brown sauce! It burns my lips. I know the other two lads love the old chilli and really embrace hot food. I thought 'I'm not going to get anywhere here,' so I just sat back and watched them hurt themselves internally! And very amusing it was, too!
Did you feel stressed when you had to drive in front of a full grandstand at Silverstone during the British Grand Prix weekend?
Yes. There was pressure all day long. The producers were saying 'you've only got an hour here. You've got to be off the track at the end of that, and not do this and not do that'. The pressure built up and up. We all had our cars for a couple of days beforehand. Driving around then was no problem. But when we go onto the track, the pressure suddenly kicked in...
Do you have a favourite moment from this series?
It was definitely the chilli challenge. That's the most we've laughed this series. It's a shame, because you don't see most of that on the telly!
Why do you think you work so well together as a trio?
Our chemistry comes naturally. You watch a lot of shows and people are striving for that chemistry. But it either happens or it doesn't, and from the off it just happened for us without even trying. Even when we were messing about together before we had even filmed an episode, it was insane. Nothing is off limits with us. We have a great laugh off camera, as well as on it. I think that's why it's been such a success - because people believe us. Long may it continue!