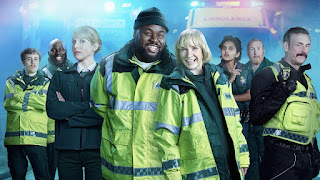 Katherine Kelly and Nathan Foad join the cast of the comedy including Lucy Punch, Julian Barratt, Adrian Scarborough, Kevin Garry, Sam Campbell and Aasiya Shah.
Filming has started on a new series of Sky Original Bloods, Sky's critically acclaimed paramedic comedy starring BAFTA nominated Samson Kayo and Golden Globe nominated Jane Horrocks. The bigger 10-episode deal will be made for Sky by BAFTA award-winning Roughcut TV (Stath Lets Flats, People Just Do Nothing, Cuckoo) in association with Sky Studios. It will air on Sky Comedy and streaming service NOW in two viewing drops coming in 2022.
Bloods follows tough-acting loner Maleek (Kayo) and over-friendly divorcee Wendy (Horrocks), a pair of mismatched paramedics and their fellow ambulance station colleagues through the life-saving world of a south London emergency service. Katherine Kelly (Innocent, Liar) joins the cast in the two new series as the ambulance stations acting counsellor and listening ear and Nathan Foad (Our Flag Means Death) will play Wendy's son Spencer.
The shows returning cast include; Lucy Punch (Motherland) as boisterous station boss Jo and Julian Barratt (Mighty Boosh) as grieving widower Lawrence. Adrian Scarborough (Gavin and Stacey) and Aasiya Shah (Raised By Wolves) reprise their roles as Gary and Kareshma, paramedics with diametrically opposing career outlooks, and Kevin Garry (Ted Lasso) and Sam Campbell (Melbourne International Comedy Festival Barry Award winner) as the glued-to-the-hip duo of paramedics Darrell and Darryl.
The news comes as it is revealed that US streaming service Hulu has acquired the series in a multi-season deal. The first series of Bloods is set to debut on the streamer next month on December 9.
The hit first series has been described as "A magnificent paramedic comedy full of gallows humour ★★★★★" by The Independent and containing "lovable characters and an impressive high hit rate of gags" by TV Times, while Radio Times described Kayo and Horrocks as "an unexpectedly dazzling comedy duo." The 10x30min episodes will be shot at North London Studios and in various locations in South London and will continue to bring humorous relief to the world and characters of the paramedic service while recognising the talent of those who put their own lives at risk in an emergency to help keep us safe and healthy.
Samson Kayo said: "I'm so excited the BLOODS team are back together again for this new bigger and bolder series. With ten episodes, there is going to be loads more laughs, friendship and fun for fans to enjoy. Maleek is reunited with his miss-matched paramedic partner Wendy and he can't wait to hit the roads again in their ambulance!"
Jane Horrocks said: "I am very much looking forward to getting back to Bloods for series 2. The scripts are already banging and Wendy is getting more naughty!"